I'm doing something a little different this Time Warp Tuesday.  Instead of talking about another picture, I thought I'd introduce you to the dolls from the last time warp (before Christmas). 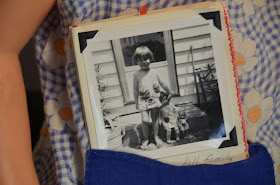 May I present, wearing those same summer dresses, Janie Walker, Dewy C. Dobbs, and Bad Ady (pronounced A-dee with a long A, not Addie). 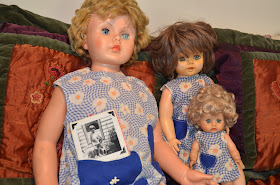 Since it's January and it was 27 degrees this morning, they are quite annoyed that I made them pose in those summer dresses.  They are very chilly so they are going to change into their winter flannel nighties.  Ahhh, that's better. 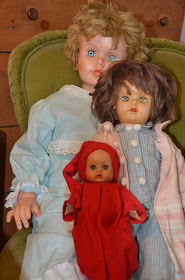 Dewy is the oldest of the crew.  She is a business tycoon who drives a black cadillac.  She has a fantastic wardrobe and is rumored to own a purple brassiere.   She was my constant companion, so her hair was loved off quite early in life.  This is her second wig. 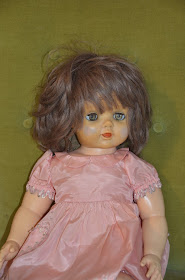 Janie Walker was the doll in the big white box.  She lived in Minnesota for a few years and then came home with me on Western Airlines.  That was back in the days when children flew for half price.  Janie was able to come home in style, seat-belted into an extra seat for free instead of being unceremoniously stuffed into the overhead compartment.  She also has a good wardrobe, as she fit into some of my hand-me-downs.  She still has her own hair but could use some Latisse. 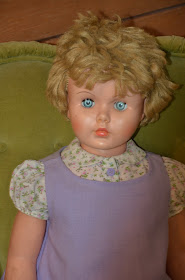 Bad Ady, now she really was a mischievous piece of work.  She also lived on the Minnesota farm for a while and would send me letters describing her devious deeds, like dangling the Baby Georgie doll out the window by one leg.  (My aunt had a brother named George.  Do you think she might have been projecting a little bit???)  Ady moved to California after a while and continued her wild and crazy ways.  She also wrote quite a bit of poetry. She spends most of her life in the red flannel robe and pointy hat, which matches the devilish side of her personality.   She says the wig is itchy so she only wears it on special occasions. 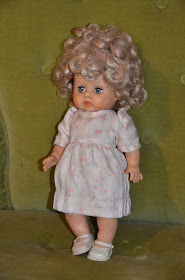 I will share a few of the letters and poems on future time warps, so come on back!