Someone has taken to doing his business outside, coming in with very dirty paws. 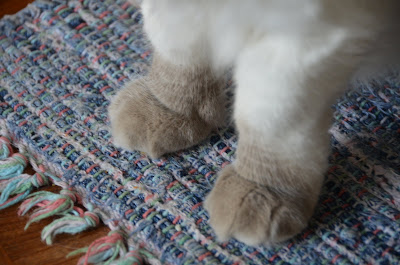 Yes, I washed the placemat afterwards.
Posted by smalltownme at 8:30 AM 6 comments: 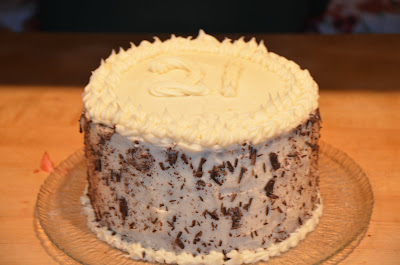 This recipe is from Paula Deen's Holiday Baking which was an $8.99 impulse buy at the checkstand, but worth every penny. Full of decadent deliciousness and no ads. It was a tossup between this spice cake and Gingerbread Cake with Creme Brulee Filling and Scotch Whiskey Buttercream...who has the next birthday??? For Thanksgiving, I may go hog wild and make the Pumpkin Cake with Cranberry Mousse filling.

Preheat oven to 350. Spray 3 9-inch cake pans with nonstick baking spray with flour. In a large bowl, beat butter, sugar and vanilla at medium speed with a mixer until fluffy. Add egg yolks, one at a time, beating well after each addition. In a medium bowl, combine flour, cinammon, baking soda, ginger, nutmeg, salt and cloves. Add to butter mixture alternately with buttermilk, beginning and ending with flour mixture, beating until just combined after each addition. In a medium bowl, beat egg whites at high speed until stiff peaks form. Gently fold into batter. Spoon batter into prepared pans. Bake for 16-20 minutes or until a wooden pick inserted in center comes out clean. Cool in pans on wire racks for 10 minutes. Remove from pans, and cool completely on wire racks. Spread Maple Frosting over one cake layer. Top with half of Caramelized Pears. (I didn't follow that part, just smashed up 3 pears with a little applesauce.) Top with second cake layer, and repeat procedure. Frost top and sides. (At room temperature the frosting is a little soft for piping. It firms up quickly in the fridge.) Garnish with chopped walnuts, if desired. (I used shaved chocolate instead because Frank doesn't like nuts.)

In a large bowl, beat butter, cream cheese and maple syrup at medium speed with a mixer until creamy. Gradually add sugar, beating until smooth.

In a large skillet, melt butter over medium heat. Add pears and sugar; cook for 20-25 minutes, stirring frequently, until pears are very tender. 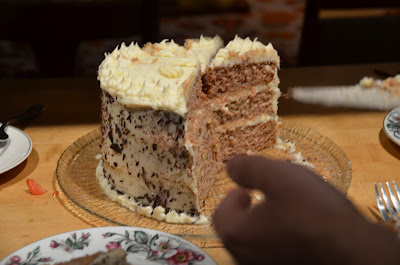 Comments closed due to spam.
Posted by smalltownme at 8:14 AM 3 comments:

Something about having a child turn 21 makes me feel really old! 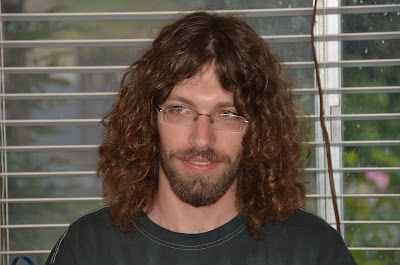 But we had a party for him anyways. 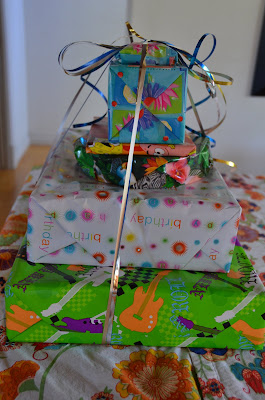 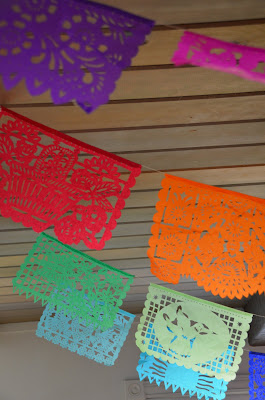 Sweet Frank, he still thinks I'm SuperMom. "Did you cut all those flags yourself?" Ha! 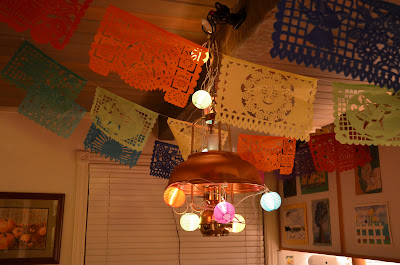 I'm not sure I like the word Geek.
noun Slang .
1.
a computer expert or enthusiast (a term of pride as self-reference, but often considered offensive when used byoutsiders.)
2.
a peculiar or otherwise dislikable person, especially one whois perceived to be overly intellectual.
3.
a carnival performer who performs sensationally morbid ordisgusting acts, as biting off the head of a live chicken. 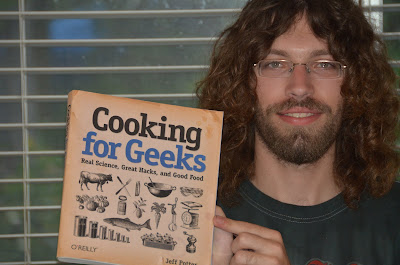 I assure you, Frank has never bit the head off a live chicken.
Looking at Ernest makes me feel pretty old, too. We may have lost one designated driver, but we'll have another one pretty soon. 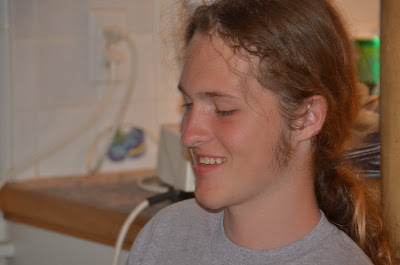 Had to have champagne for the 21st birthday. Time to get out my grandma's glasses. 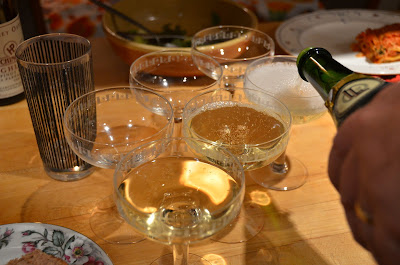 I made what I call a "pretty cake" this year, as opposed to the novelty cakes of prior years. Mr. Thomas was eager to take a bite. 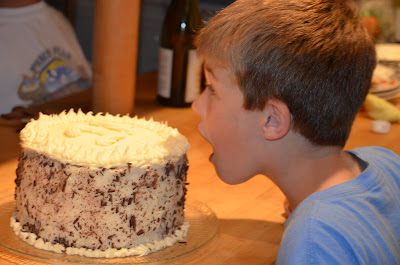 Ernest took this picture for me. I would have needed a footstool to get the camera up that high. He didn't. Sigh.

This was one fantastic cake. 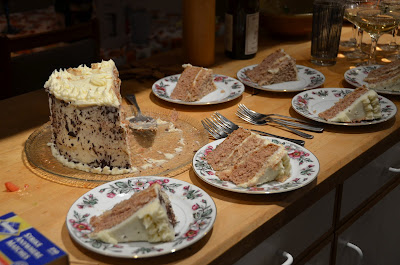 Posted by smalltownme at 8:38 AM 9 comments:

My Spidey Senses are Tingling

We've had a glorious spider web in the front yard for a few days. 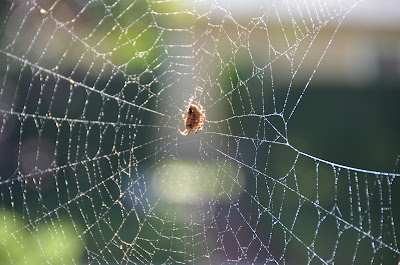 I cheated on that picture -- I sprayed the web with water first.

If you're at all squeamish about spiders you might not want to look at the next two pictures. 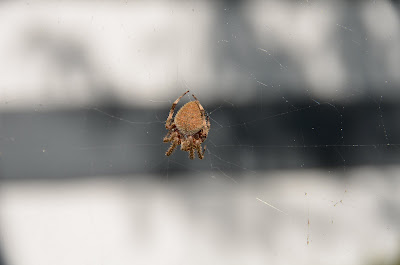 Can you take it? Here's another. 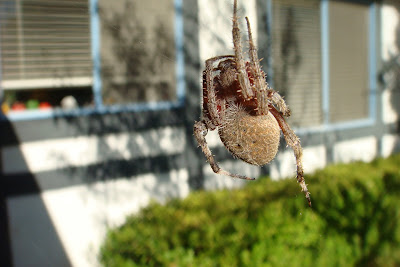 I warned you!
Posted by smalltownme at 1:22 PM 3 comments:

Frank was kindly finishing some leftover ribs (leftovers, the bane of my existence) and Homer decided to help. 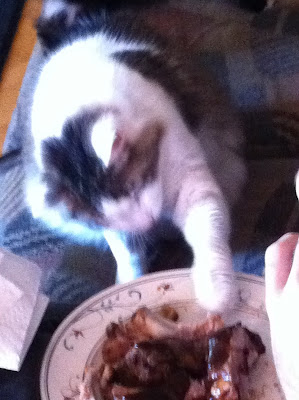 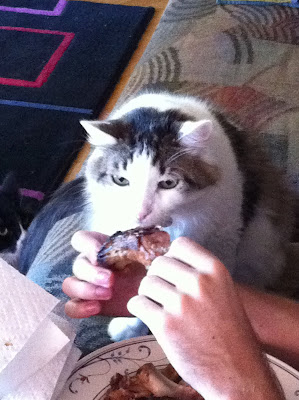 Yes, Frank gave him a bite.

When Homer was done, he daintily licked the sauce off his paw.
Posted by smalltownme at 8:00 AM 5 comments:

We're starting to see the usual signs of fall around here.

Handy's laid in a good supply of firewood and is itching to use the fireplace or woodstove. He wanted a fire Saturday morning and I begged him not to since it was going to be hot in the afternoon. 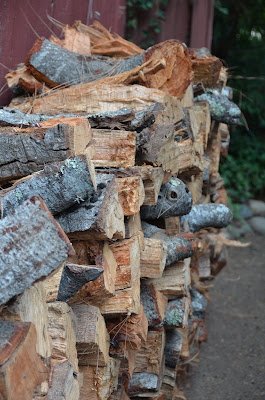 Frank and I love blueberry bagels for breakfast. Late on Sunday afternoon, the pickings were pretty slim at the store. I picked up these seasonal pumpkin bagels, and they are actually quite delicious.

Since I'm not working right now, I've set a few minor goals for myself. This is totally unusual for me! One of them is to complete some of my many unfinished projects. This needlepoint was shoved away on a shelf for a couple years. I was annoyed to find that it had gotten a little motheaten. I've repaired most of the damage now, and am stitching away. Of course, finishing the canvas is one thing. Then it still needs to be turned into a pillow. 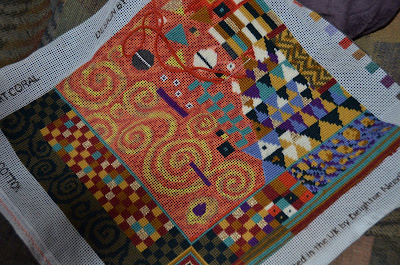 We don't get a lot of fall color here. We go from green to yellow to brown. So I was quite pleased to find this gorgeous leaf in the yard this morning which runs the usual gamut and adds some surprising red in it.

My apples are slowly ripening. 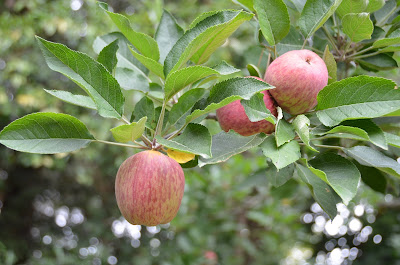 Francine feels good cat camoflage is appropriate for any season. 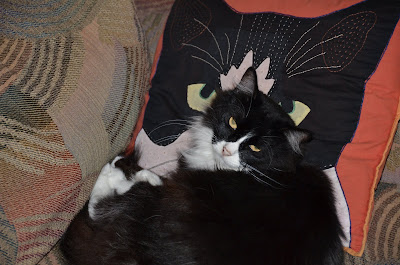 What says fall in your world?
Posted by smalltownme at 10:35 AM 9 comments:

Yesterday was my first day home alone...no husband, no kids, no job, no worries. Well, maybe not the last part. I always worry about something. My mother always said I had worry lines on my forehead as a baby.
I did get some things done...some cleaning, some cooking, some exercise, some reading.
We were expecting a 100° day yesterday. Ernest said it hit 101° just as cross country practice started. So I wanted to get my cooking out of the way before it got too hot. I baked enough chicken for 3 meals...roast chicken last night, green chicken enchiladas tonight, and maybe chicken chow mein in a day or 2. I've got to give them a break from chicken tomorrow night!
Cluck cluck cluck. 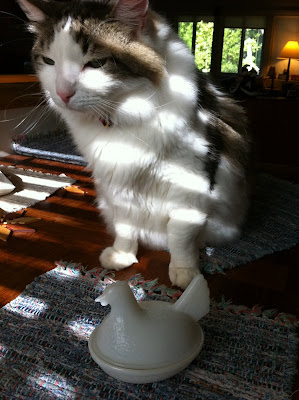 Homer feels he hasn't had enough press lately so he decided to crowd into my chicken picture. He also feels it is misleading to say I am home alone when he is such good company. Homer had a very successful day yesterday when he managed to con Handy into a second dinner at 6:00 while I was out of the house. "Meow meow, what? No I haven't been fed yet. Meow meow. I've been starving all day. Meow meow. " That lying cat. I fed them both at 4:30. And his accomplice, Francine, just went along with it.
Posted by smalltownme at 9:17 AM 7 comments:

To be fair, I really haven't been able to look at Frank's phone to note the subtle differences.
What he has TOLD me is: his screen is bigger, the phone is lighter, he can easily expand his memory with a mini sd card, and he can play old Gameboy games on it. So there, Mom.
We're still a house divided.
Posted by smalltownme at 11:36 AM 2 comments:

From my last post, with comments.
My husband, still using an ancient phone (the man won't even text), is now thinking he might want a smart phone (for e-mail and maps) so we are showing off their abilities. Showing off? No, this means war!

Battle #1: MAPS. Objective: Show a satellite view of our street and find the restaurants nearby. The iPhone blew away the Samsung droid in the Battle of the Maps.