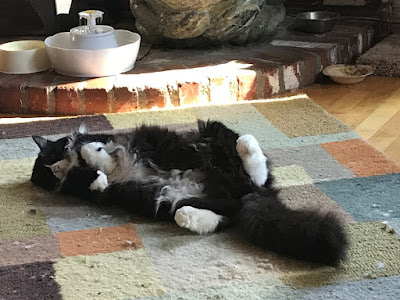 I didn't see Fifi at all on Tuesday morning. It was a mystery. She had to have been somewhere in the house. I checked her regular hideouts. I interrogated the usual suspects, I mean other cats. Hunter had Harry in a toothy necklock. "Dude, keep your mouth shut!" Leo, my informant, seemed like he wanted to confess but I could barely get a peep out of him. Well, when I got home from work the dame was back, alive and well and meowing at me.
Posted by smalltownme at 3:43 PM No comments:

Finding joy, or something, in the covid times.

Finding joy, or something, in the covid times.

I was actually happier during the full-on shutdown. Home is my favorite place to be. Handy Husband was working from home for the first few weeks (before his company got their essentialness in order). He had so many online meetings. Poor guy. When he had a meeting I would go outside (Spring had beautiful weather here). I would pull weeds and use my weed whacker! Or I would walk around the neighborhood.

But in early April I broke a toe in service to Francine, Queen of Cats. Yes it really takes at least 6 weeks for a broken toe to heal. So no more walkies for me.

So I sat, sewed masks, read books, watched movies, cooked, gained weight. Towards the end of the shitdown (oops typo but it’s funny) the bookstore got some PPP loan money so I worked a few hours a week fulfilling phone, email, and curbside orders. It slowly ramped up until we were open for inside customers by Memorial Day.

I started walking to work at some point to work off the broken toe weight. I don’t consider it quarantine weight. But it’s been a long hot summer so I am back to driving. Also a co-worker is now car-less so I pick her up 2 days a week.

Oh. The finding joy. There’s not so much. Working on it. Meanwhile...

Working in your favorite place is no longer joyful when you have to babysit the stupid asshole mask droppers.

A co-worker just this week had to confront a shirtless/maskless man who wouldn’t leave. She called the police but he left before they arrived. He came back later, properly attired, bought one book, then walked to the back and attempted to shoplift another. She caught him! She rocks! The store is not pressing charges, as far as I know, but we have the asshole’s name because he charged that purchase!

So where is the joy? Pretty much nowhere. Vague moments. Maybe in a nice meal. So we do menu planning. We always did, but tasty dinners seem to be a thing we can look forward to.

I am cautiously excited about a musical item Handy bought. I had a brief moment of joy with it today.

Maybe more on that later.

Hang in there, friends. I love you.