I love Facebook for many reasons, mostly because I am nosy and like to know what everyone else is doing.  I like to know what Jen on the Edge is cooking for dinner, the cute things your kids and pets have done, when the Skipping Club will meet next, and the love poem my son wrote to his girl.

But where there is love, there is also hate.  Besides politics, I really hate the sharing of things that aren't true.   It only takes a few moments to do an internet search on these warnings and reminders to see if there is truth or some doubt.

The latest ones that have been bugging me...
I don't like to see misinformation spread but I also feel like a bitch if I point it out.   What would you do?
Posted by smalltownme at 7:46 AM 8 comments:

I love Humans of New York.  One day, they featured Michelle Joni, who started a skipping club! 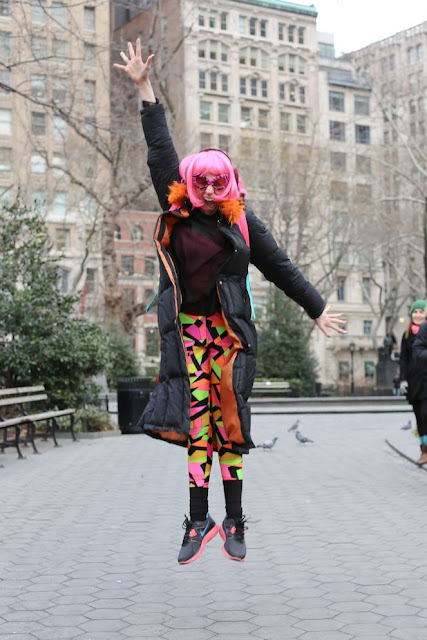 “I started a skipping club, and today is our first meeting!”
Photo from Humans of New York.

A skipping club!  You know I love to skip! I doubt I could keep up with the younglings but what an awesome way to have fun and exercise too!

Thanks always to Jenn, for hosting Time Warp Tuesday.

A nearby natural history museum usually hosts a traveling exhibit during the summer; often it has been animatronic dinosaurs.

Once, when Frank was very small, it was Peter Rabbit. As a Beatrix Potter fan, I probably loved it more than Frank did! Why didn't I take pictures inside? It was the cutest thing, with displays of original art and interactive gardens and fir trees where the wee ones could pretend they were rabbits.

And there were rabbit costumes to wear whilst posing in front of a giant cabbage. 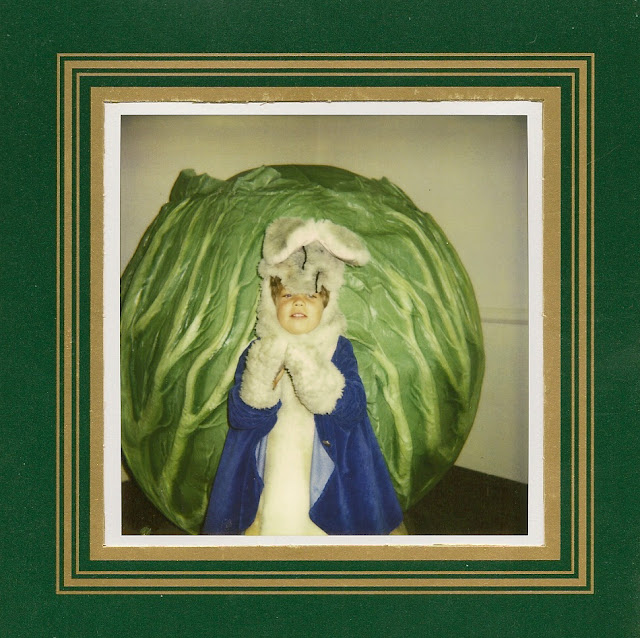 At home, the picture sits on a shelf in front of this rabbit statue. 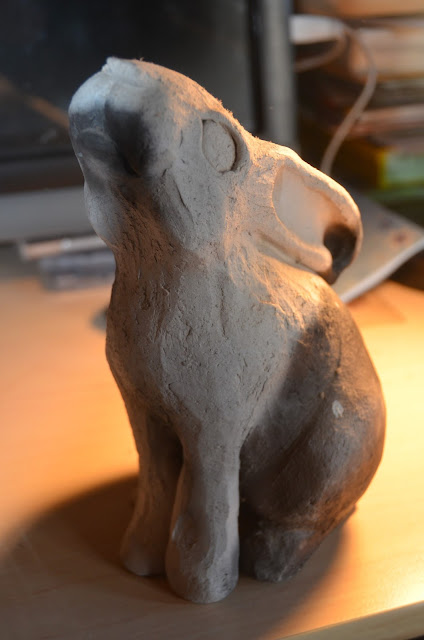 I'm not showing the whole shelf because 1) that would require more dusting than I want to do tonight and 2) there are great pictures for future time warps.
Posted by smalltownme at 5:45 PM 5 comments: 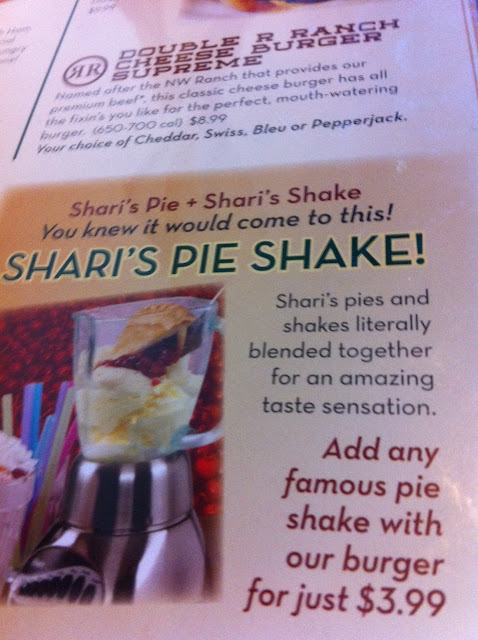 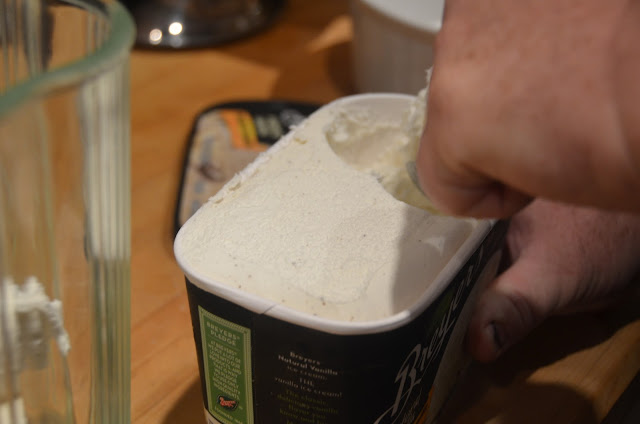 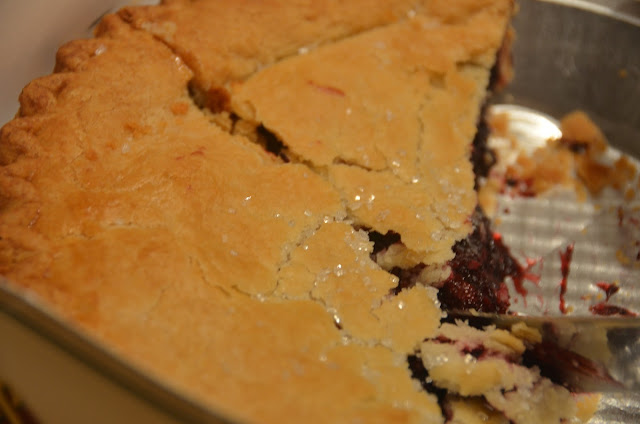 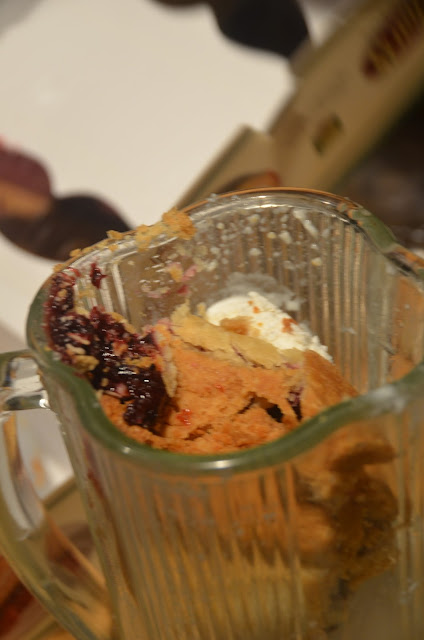 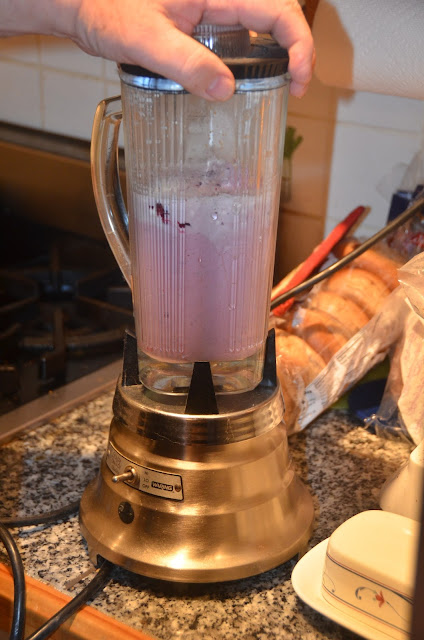 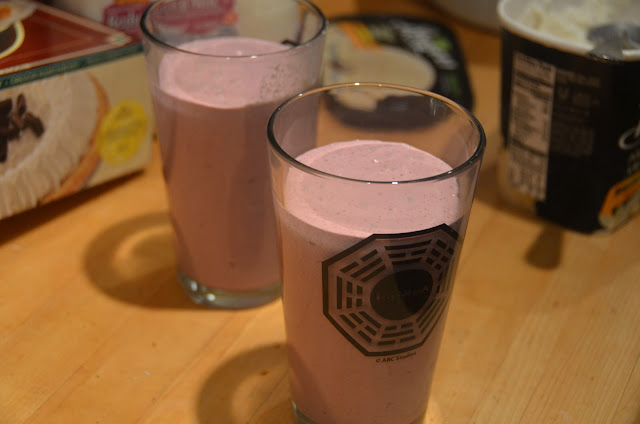 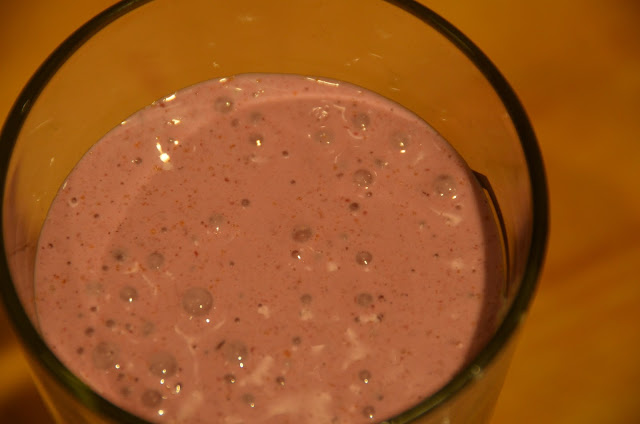 The verdict:  If you like pie a la mode and you like shakes, you'll like this.  Pie in a glass!  Very useful if one is on a liquid diet.  Myself, I prefer my pie plain.

Apparently, so does Homer. 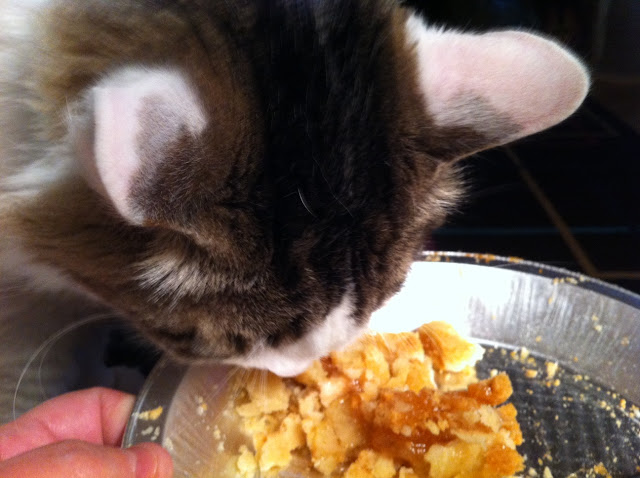 This week's Saturday PhotoHunt theme is Upper.  Here's the upper portion of the "Christmas tree" at my father's house.  One Christmas in the 60s, our tree was a foot tall redwood in a pot.  After Christmas he planted it and now look at it 45 or so years later. 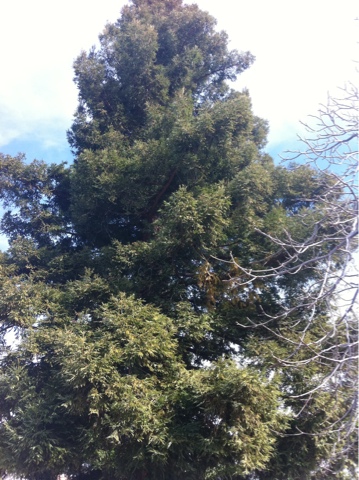 And the lower portion... 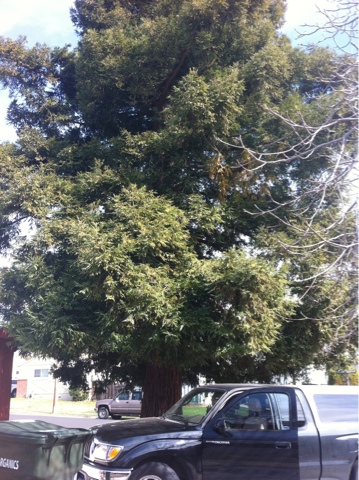 Posted by smalltownme at 8:13 AM 3 comments:

I don't really have a daily drive anymore now that Ernest is mobile (edit - I mean since he's had a drivers license, not that he hasn't been able to move around!), but I do go out on a random basis.

Yesterday morning started off sunny, which was quite disappointing to the Handy Husband because rain was predicted and he had hustled to put the important things like his barbecue under cover.

By 10:00 the incoming clouds were ominous, so I sent him this picture to make him feel better. 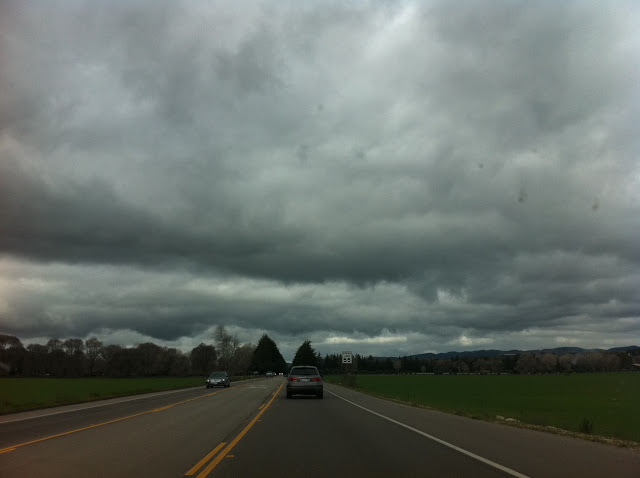 It took until late afternoon to get the predicted rain.  I guess he's a happy camper now.  Or a wet driver.  Or whatever.

Wednesday has arrived with a perfectly clear sky.  Today's activities will include helping Ernest pack up the junk toys stuff he is purging from his room, taking him for another set of finger x-rays, and going to the farmer's market for pistachios.

What's happening on your Wednesday?
Posted by smalltownme at 8:49 AM 6 comments:

This was from Frank's perspective.  Nothing better than a cat on your lap on a cloudy afternoon. 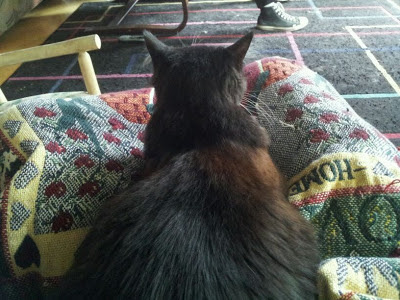 Posted by smalltownme at 8:46 AM 3 comments:

This week's theme is Letters, Numbers and Other Characters.

I've been away for a week but happened to get a quick shot which fits the theme.  The perfect bike rack at a library. 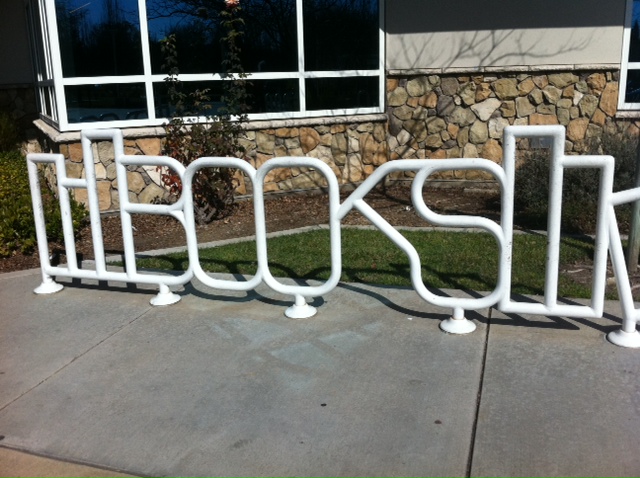 Calzone and Catzone, photos and humor courtesy of the Handy Husband. Calzone preparation courtesy of Frank. 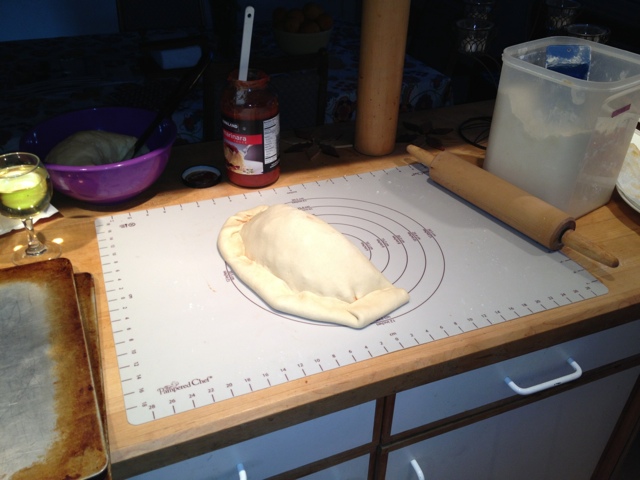 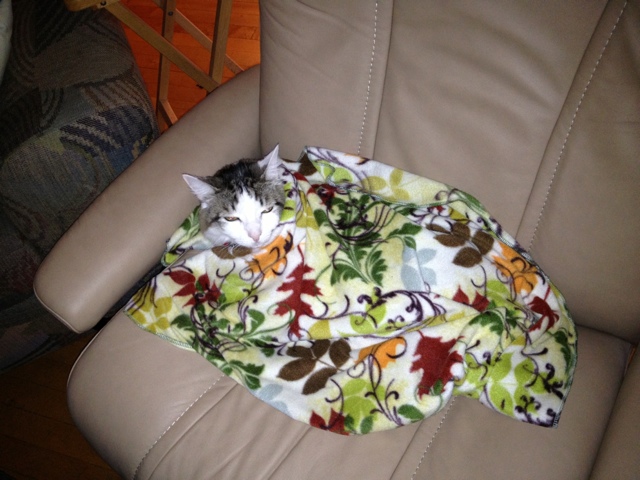 Posted by smalltownme at 3:44 PM 5 comments: 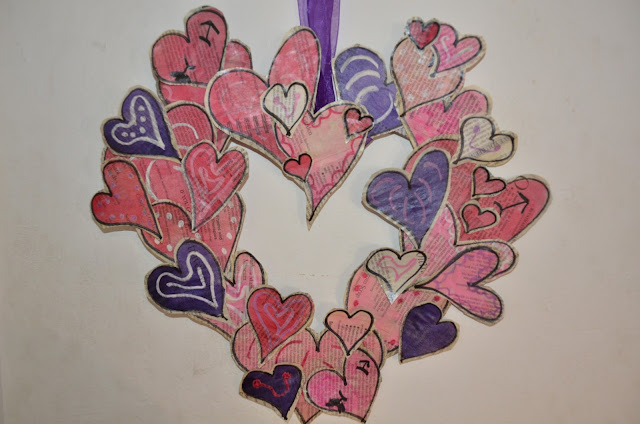 One of my little projects, same process as the recession wreath.
Posted by smalltownme at 6:00 AM 8 comments:

Someone that wasn't me loaded the washer so full that it wouldn't run. Sigh. 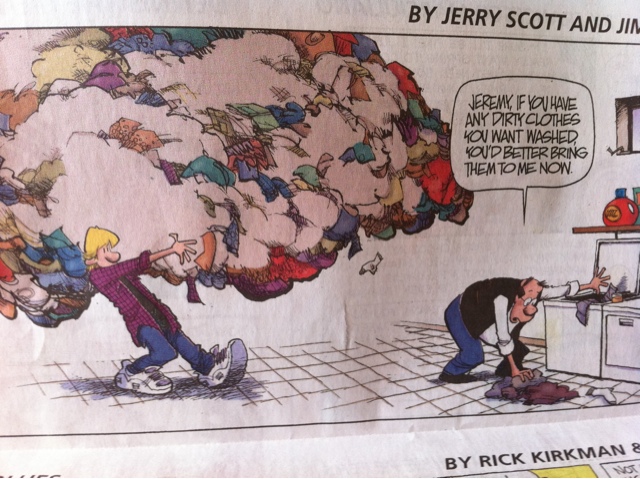 I woke up a week ago Saturday and could barely walk, having strange pains and soreness in my left foot.  Several years ago I woke up with a wobble in my ankle, but this time it's somewhere completely different.  As I have an blame my mother for that inherited fear of doctor's appointments, I am going to wait it out a bit longer. If I gut it out and actually move for a while, it starts to feel better.  Yay, Zumba.  I should really try Barb's golf ball thing.  Does anyone near me have a golf ball?  I could use the cat's toy lighty-uppy ball if I could find it under the couch.

Frank has been exceptionally kind and in addition to making dinner last night using leftovers, oh that boy of mine does shine, he has also entertained me this week with a marathon of Star Wars videotapes.  Yes, the tapes.  The tapes that are now collectors items since George Lucas changed his stories. Frank and I are of the HAN SHOT FIRST school and we saw it.  Must archive those tapes! 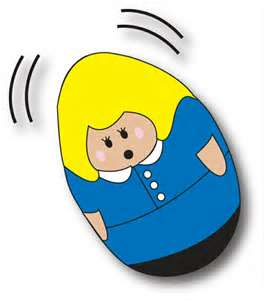 Ernest came home from a bike ride today, also hobbled after a fall on his right side.  The damage was largely to his middle finger, which has a small chip fracture.  He's splinted and looks like he's flipping the bird.  We do have the greatest ER here. We have a small town wait (almost none!) but it's a branch of a big town hospital so we get those advantages too.

He's hoping that the bushes he plowed through were raspberry rather than poison oak.  I think that's wishful thinking; he'd be a lot more scratched if they were berries. I know nothing about poison oak except to wash the clothing right away.  He says it's best to shower in cooler water.  Hot water spreads it more.  Brrrrrrr.

He's also hoping he's not splinted too long as it will interfere with the sax.  Frank tried to console him with, "you could probably still play guitar" but Ernest said "I play sax way better than I play guitar."

Um...I don't have a video of him playing guitar.  Which he plays just fine, by the way. But I do have the sax video which I shall re-embed here again BECAUSE I CAN!  And I'm too lazy to wait another 90 minutes to upload a different one. Besides, this is my favorite.


Well, we'll know more about the finger after another appointment this coming week.