I'm slowly picking away at some long unfinished projects.

For years, my husband's been using an old blanket to cover up the fireplace when we're not using it in the winter, to keep cold air out. And for years I've been intending to make something nicer instead. A fireplace cozy. 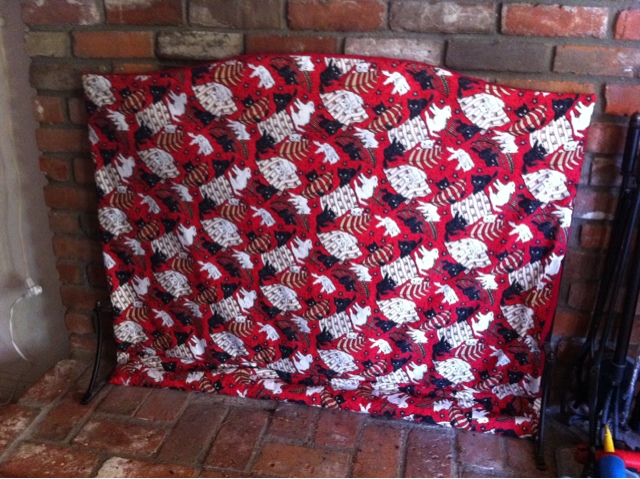 This fabric predates our cats by several years, but what do you know? 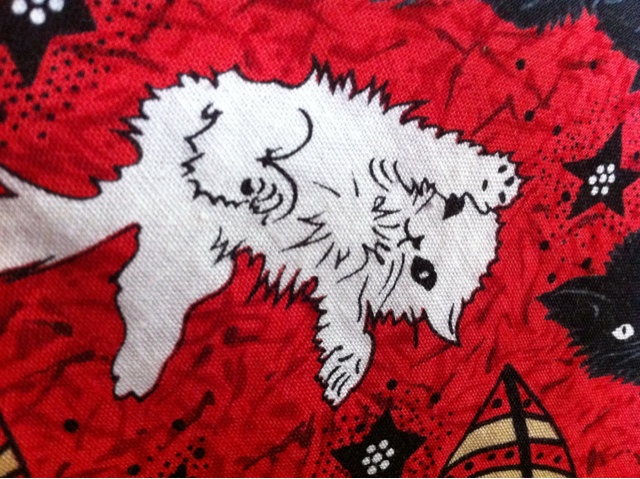 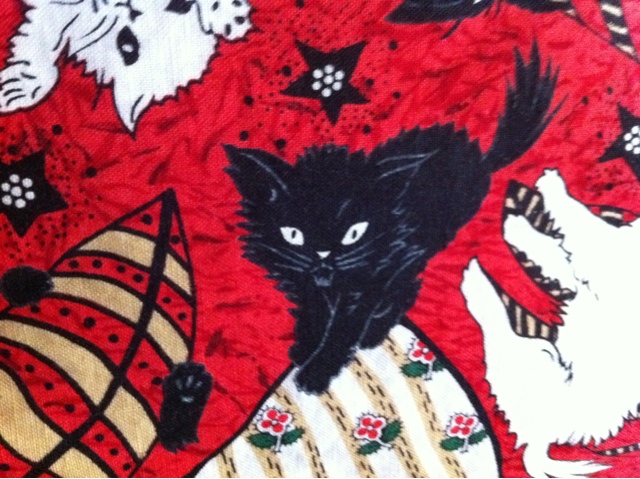 Posted by smalltownme at 8:17 AM 3 comments:

Happy Thanksgiving from me and my family.

May you never be on the wrong side of the door. 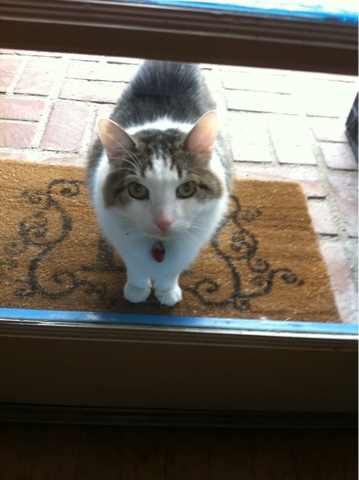 Posted by smalltownme at 8:00 AM 4 comments:

I'll just come right out with it and say: I made my son a skirt.

Technically this is for changing in and out of those tight spandex shorts at bike races. You can do it under a towel but you run the risk of the towel dropping at an inopportune moment. I could have said, go borrow your brother's kilt but I wouldn't want it to get wrecked. His coach has something like it.
So Ernest asked me to make him one. I offered to make it of something plain and neutral, like denim. No, Ernest wanted some funky fabric. Out of several choices from my stash, he picked Cat in the Hat fabric. He'll make a bold statement at his next race. 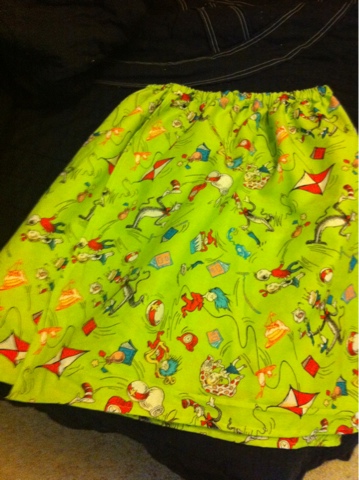 Posted by smalltownme at 8:06 AM 7 comments:

It rained on Saturday and Homer disappeared after breakfast. I couldn't imagine that he went outside on a day like that. He was not in his usual post of alertness when I cooked the bacon. Usually he is at BaCON Level 1 (maximum readiness to mooch bacon). I was worried and called and called for him. You worry what your neighbors will think when you go outside in jammies and call out, "Homer! Bacon!"
Finally he appeared from under the table. 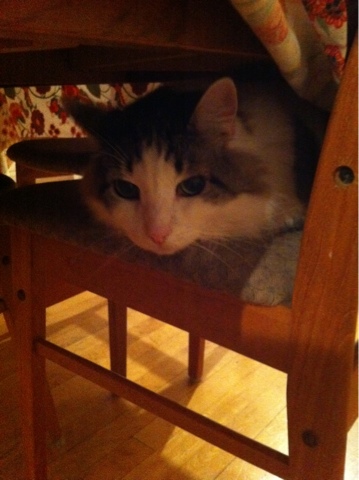 He slept under the table most of the day. Oh, let me be honest, all day. I mean, he sleeps all day anyways, but usually it's out where we can see him. Maybe the darkness and wetness of the day made him want to cocoon and hibernate.

I caught another strange spider around the house... 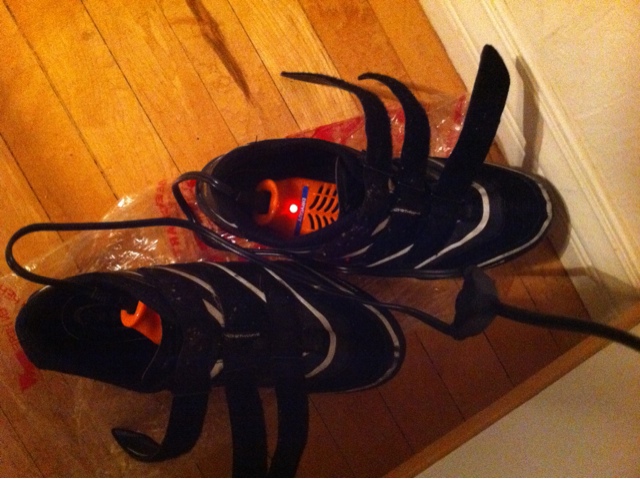 Actually, Ernest is drying his cycling shoes after a ride in the rain yesterday. I learned last year that in a pinch you can stuff the shoes with newspaper -- it wicks up the water and you keep changing the paper. But these shoe dryers are a little easier.

Today the sun is shining and 3 out of 4 of us have the whole week off.
Whoo-hoo!
What's the whoo-hoo for you today?

Posted by smalltownme at 8:31 AM 4 comments:

It's another foggy day and I'm going to curl up with a blanket and my first cup of coffee. 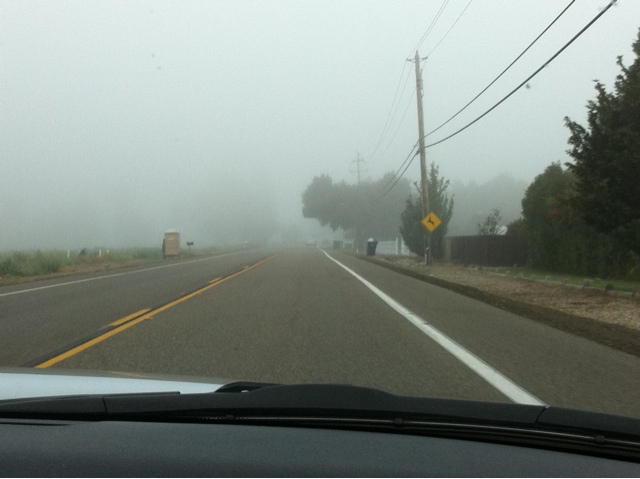 Love how I got both the portapotty and the jumping deer sign. I hope the deer don't run into the potty. One night on the way back from picking up Ernest at Hogwarts a deer ran into the side of my husband's truck, in just about this spot.
Apparently today is Clean Out Your Refrigerator Day. I usually clean mine (i.e. throw out what's rotten and spoiled) on Thursdays, since our garbage is picked up on Fridays. I've had great success in eating our leftovers, thanks to a week of homemade soups for lunch. All made with leftovers. Cream of broccoli soup plus 3 kinds (chicken, beef and pork) of spicy tortilla soups, sans the tortillas because I didn't have any. This week's leftovers include quiche and enchiladas, which are still attractive enough for others to take for lunch.
Frank and I are going through marathons of tv shows on Netflix. We've watched Warehouse 13, Heros, and are on Firefly now. I vote for Buffy the Vampire Slayer next, what do you think?
What's happening in your world this week?
Posted by smalltownme at 8:52 AM 7 comments: 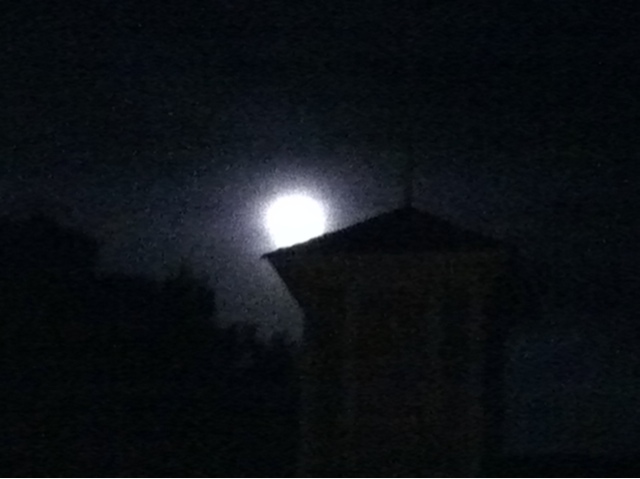 The moon was so bright last night. I took this photo at Hogwarts around 6 p.m.
Later I woke up to light streaming in through the curtains and assumed it was almost time to get up. Wrong! 4 a.m. Sigh.
Posted by smalltownme at 8:52 AM 9 comments:

No, I'm not watching A Clockwork Orange.

The Handy Husband had lasik yesterday. 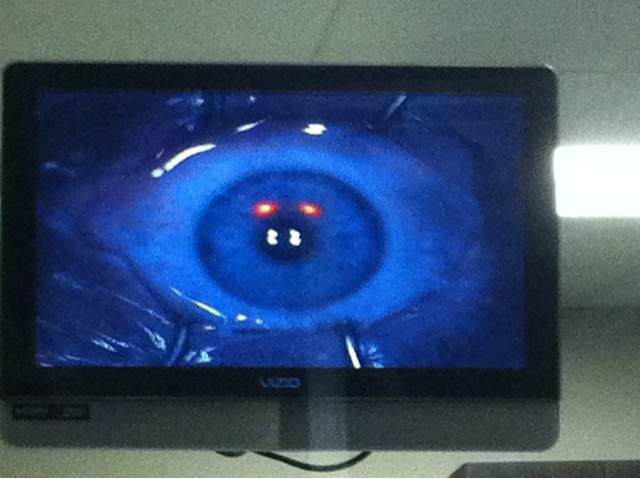 I'm still squeamish but he's pretty happy with the results. He hated glasses, and hated contacts too, so it was a good choice for him.
Posted by smalltownme at 9:24 AM 8 comments:

Homer says he fits in very well with Pink Saturday -- ears, nose and pads or should I say iPads.
He enjoys sitting on my reading material, no matter whether it is paper or electronic. 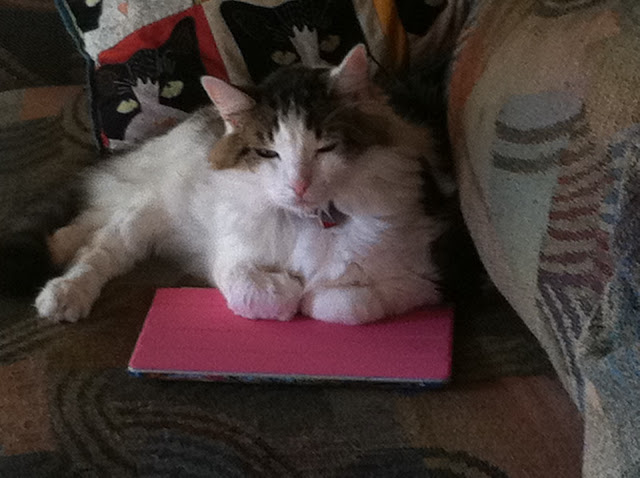 How appropriate that he is sitting on the FOOD section. 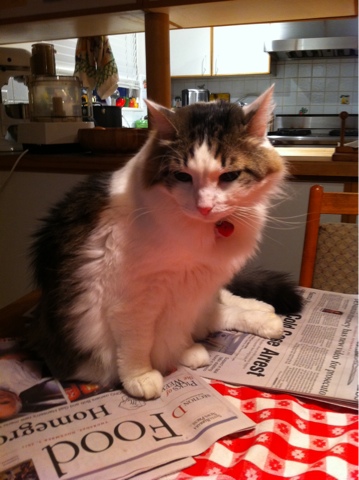 Pink Saturday - Beverly at the blog "How Sweet the Sound" hosts Pink Saturday. Let the color pink inspire you!
Posted by smalltownme at 8:30 PM 6 comments:

There's a nip in the morning air now. I find I have to put on socks in the morning, although I end up taking them off and going back to sandals in the afternoon.
For the longest time I wore white socks. I confess, they were hand-me-downs that my sons had outgrown. Sad but thrifty. But then a sock store opened in town. And they have the most irresistibly cute socks... 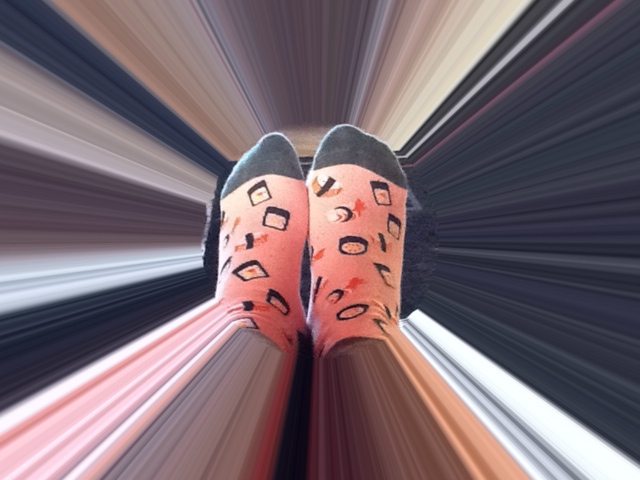 But it was so cold and windy yesterday, I had to resort to wearing real shoes. 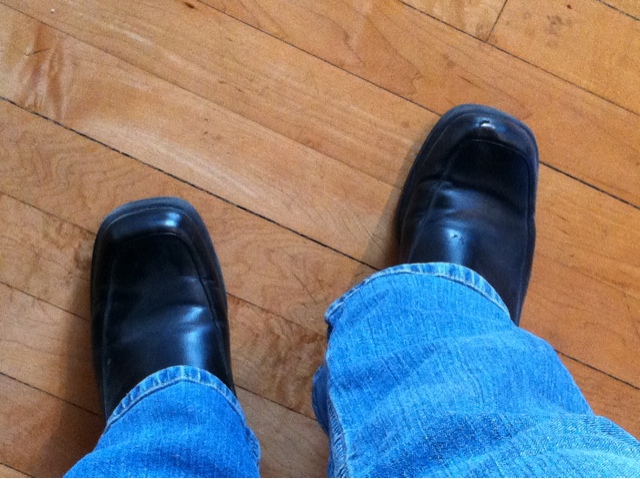 Which was good timing, because my beloved leopard slides have come undone. (Thanks to Jen, I now realize it is more like cheetah but it says leopard on the box and I've called them leopard for so long now I just can't stop.) I tried mending them once but my knot came untied. I guess I'll try to fix them again. 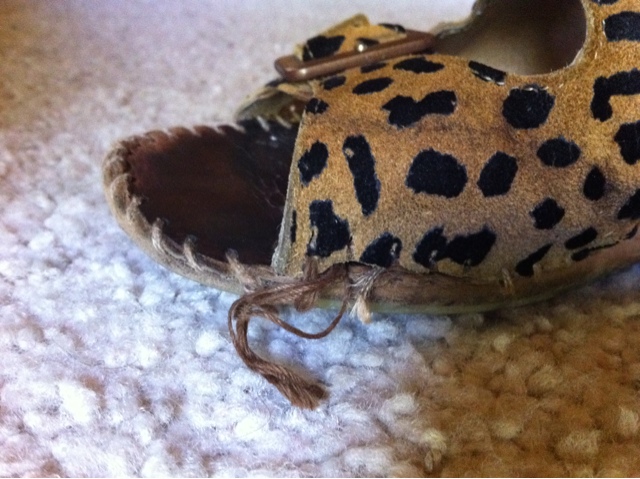 Although they are not the best shoes for today's weather -- a whole 1/8" of rain. Whoopee! 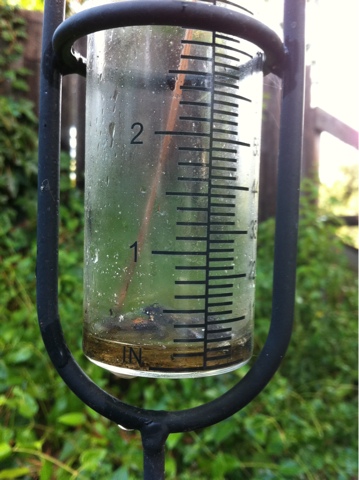 What are your tootsies wearing today?

Posted by smalltownme at 9:29 AM 3 comments:

It was difficult enough to shop for Frank's birthday, so I'm already starting to worry about Christmas. He just doesn't want things, so we end up giving him things he needs. Like underwear and coffee mugs.
But since his birthday coincided with Talk Like a Pirate day, he was bound to get some kind of pirate merchandise. 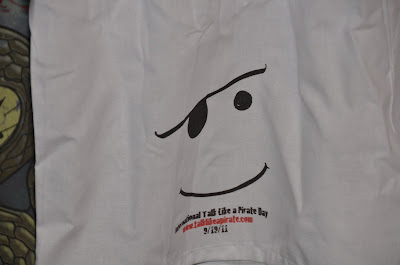 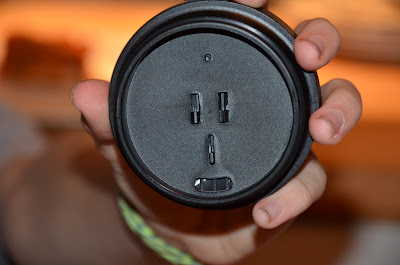 shocked?
If you were an emoticon, how would you look today?
/:-/ This is me, frowning, because Ernest is running extremely late. No wonder the water bill is so high.
UPDATE at 7:25: Ernest just informed me that he is not running late...he has free period first and there are no jobs this morning so he doesn't have to be there till 8:30.
;0
Posted by smalltownme at 7:22 AM 5 comments:

The fog was thick this morning. I should use my time wisely and take more pictures while Ernest is driving. 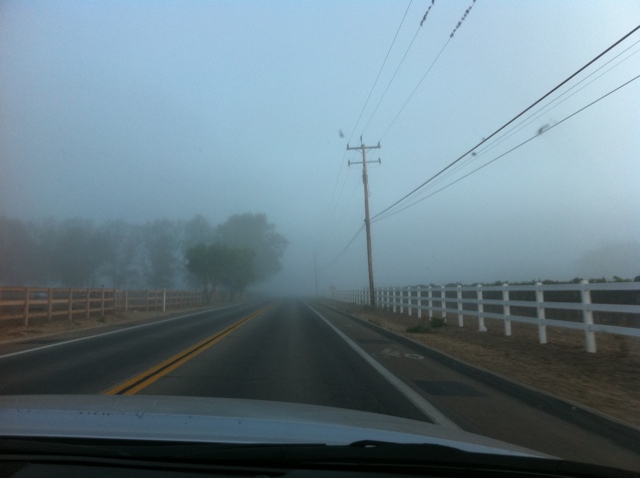 Now he's discovered the "sport mode" on my car. Actually we can blame my husband for that. He told Ernest about it last night. "Mom, it's like turning the car up to eleven. But your car's already an eleven."
Posted by smalltownme at 9:20 AM 4 comments: