After a concert drought, when it rains, it pours. Two tickets for Bonnie Raitt literally fell in our laps.

I hadn't seen her live in years, so this was a real treat.

We had dinner at a favorite Mexican seafood place. I have been eager to try the shrimp cocktail. (I did not have a picture, so I borrowed this from Sara K on yelp.) 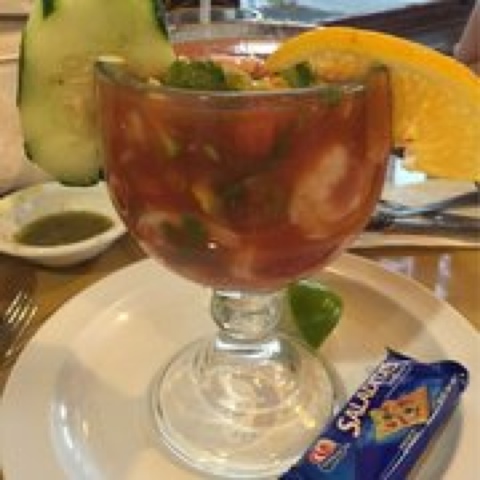 Mine looked more or less the same, but with a shrimp hanging over the side. It was like gazpacho full of shrimp. Very good, and enough for a full meal for me. Handy had an octopus cocktail and two tacos. I think he overdid.

Then we hiked up the hill. The show was opened by Richard Thompson. I had heard of him for many years, but never heard him. Now I would like to hear more of him.

Bonnie was just great, playing a mix of old and new. She finished the show just seconds before the 10 pm noise curfew. What a pro!

I didn't get a new best friend this time. My new seat mate arrived rather late. She did offer me a corner of her unnecessary seat padding but, not wanting to have lopsided hip alignment, I politely declined. Padding used to be helpful when the seats were metal benches, but now they are contoured plastic seats with backs and are actually comfortable. I didn't hear much more from her until the quiet songs, when she unfortunately decided to sing along.

A few rows ahead of us, a hairy toothless weather-beaten man was trying to be a NBF to many folks, except the venue staffer. He was berating her because she told him he couldn't stand in a fire safety area to watch the show.

Walking back to the car we were nearly in a walking accident when the group in front of us stopped short in the middle of the sidewalk to moon at the cow.  (Photo from kqed.org.) 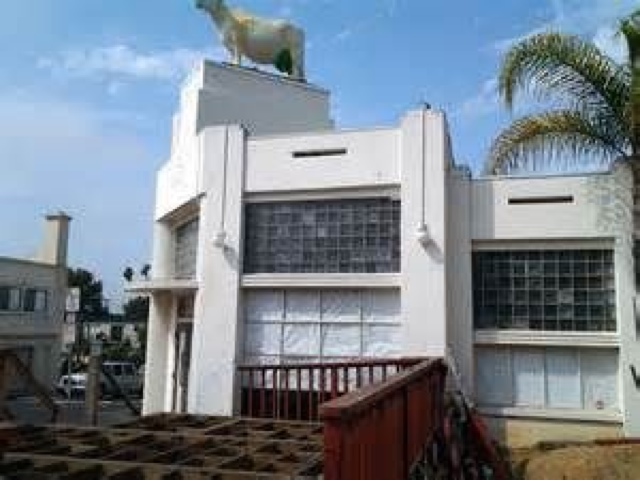 A couple things at the fair caught Handy's eye. 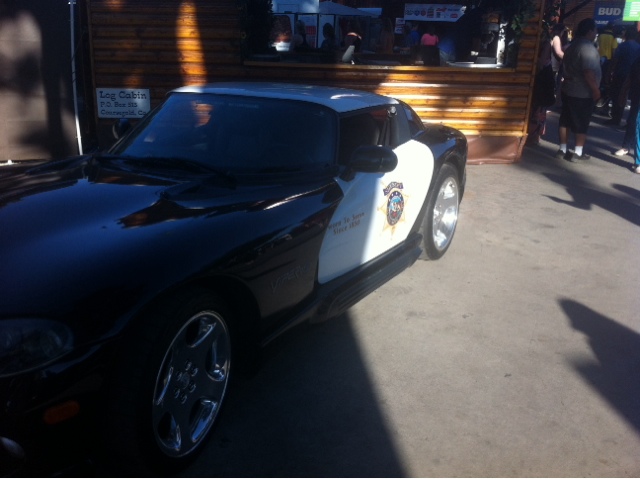 And the electric cigar box guitar! 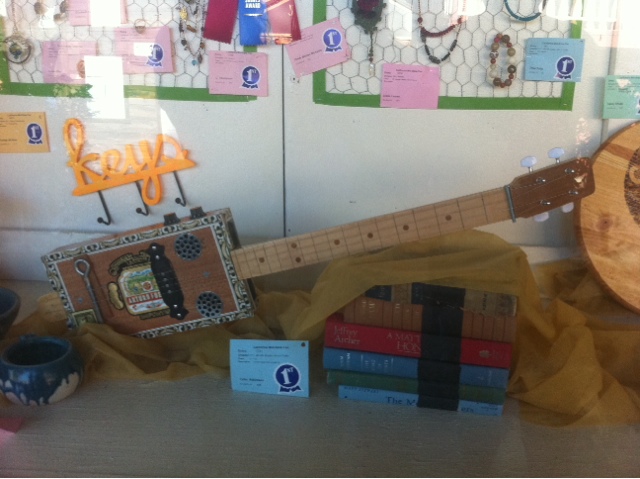 I love to walk through the Home Arts displays at the fairgrounds. There was a definite superhero theme going on.

A crocheted Batman. This reminded me of our family heirloom crocheted ET, made by Handy's late grandma. 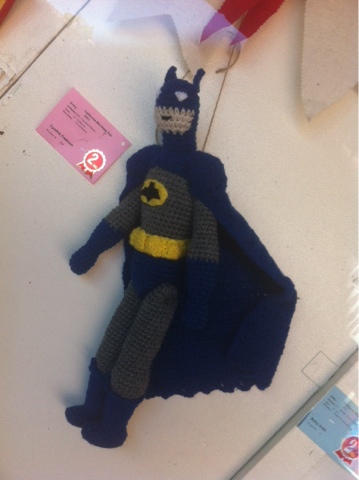 I always love the place settings. Ant-Man's picnic was a prize winner. 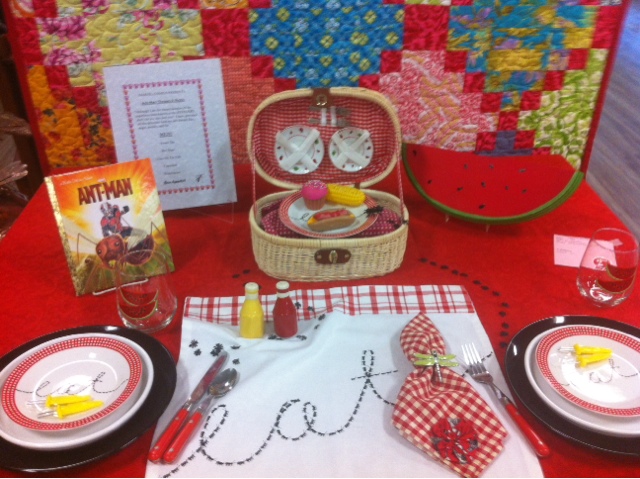 This Superman cake was feeling the heat, since the fair had been running for many days in 100+ degree heat, but I bet it looked terrific when it was first displayed. 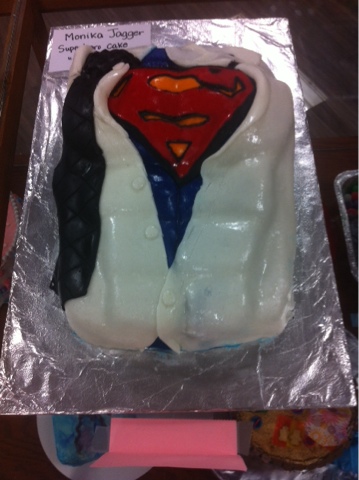 On the animal side of the fair, the handwashing station was delightful. There was a bubble machine somewhere. 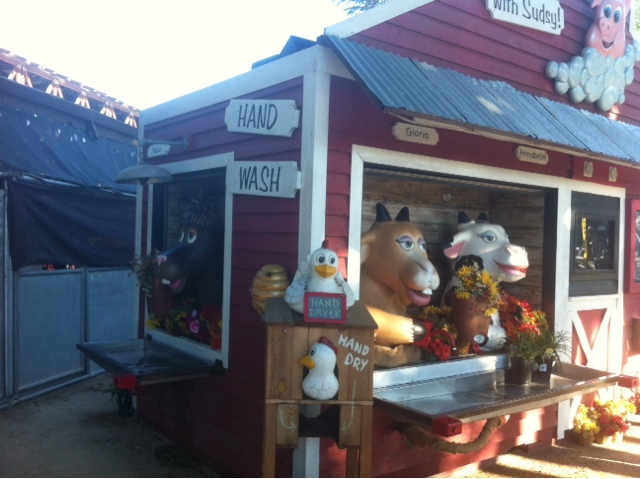 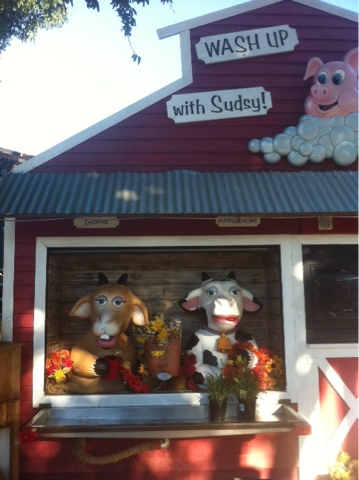 The giant burger drew us in, but we wished we'd walked further as there was better food elsewhere. 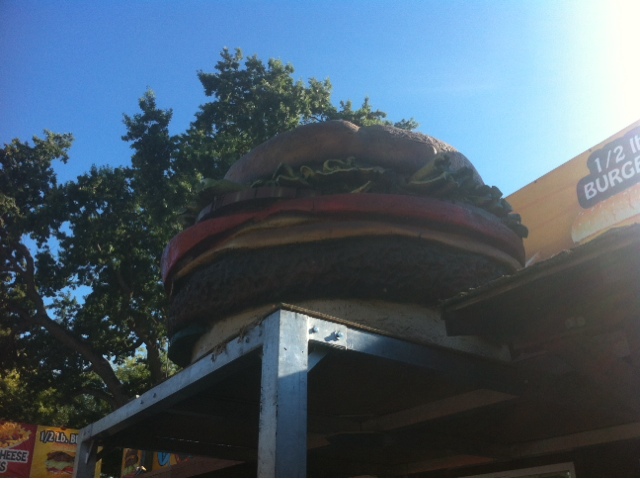 Frank got a deep fried Twinkie. Bucket list. He feels he does not need another one ever. 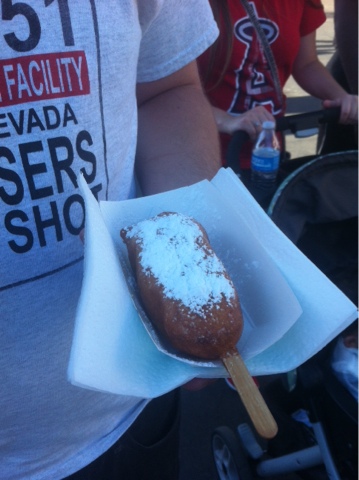 I had wine with a pink straw. That's a repeatable experience. 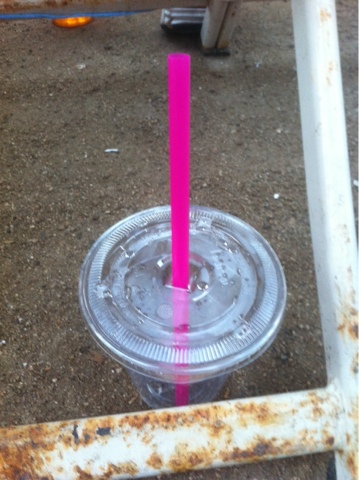 Posted by smalltownme at 6:12 AM 2 comments:

Concerts have been few and far between the past few years.

Ernest reports he recently saw Dave Matthews Band and it was one of his top 3-4 concerts ever. (He says the others would be Primus, Steve Miller, Roger Waters.)

We had tickets for Hollywood Vampires and were quite worried to hear that Joe Perry had collapsed on stage a few weeks ago. Remember our experience with the Aerosmith cancellation? Although we finally did get to see them.

I am still navigating the world with an elderly iPhone4 which does its business just fine and survived a dip in Homer's water bowl. But its pictures are so bad compared to current standards. 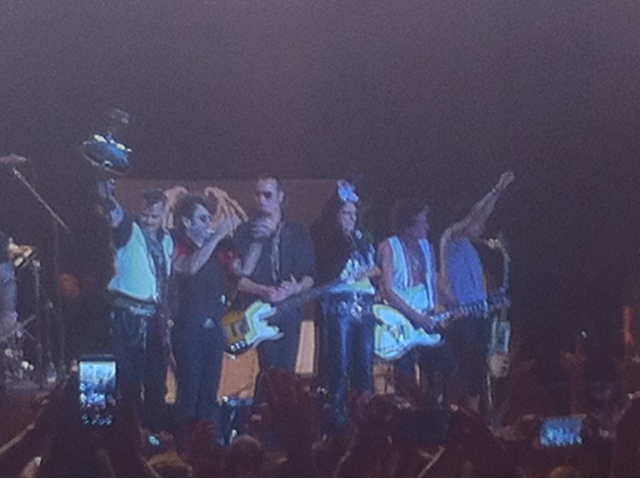 That's the best of a bad bunch.

But the sweet sweet marketing peeps at the Mid-State Fair sent me an email afterwards. So these good pictures are from them: 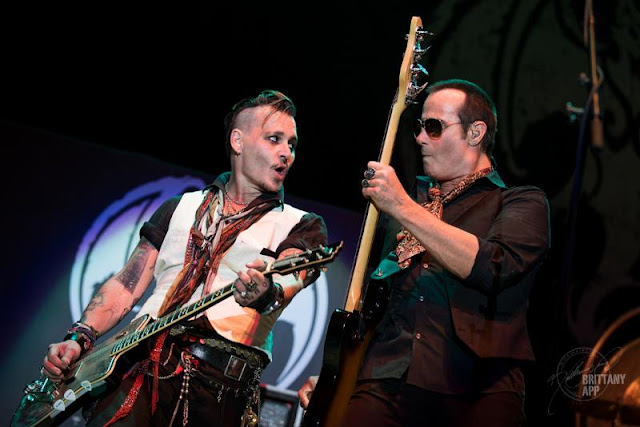 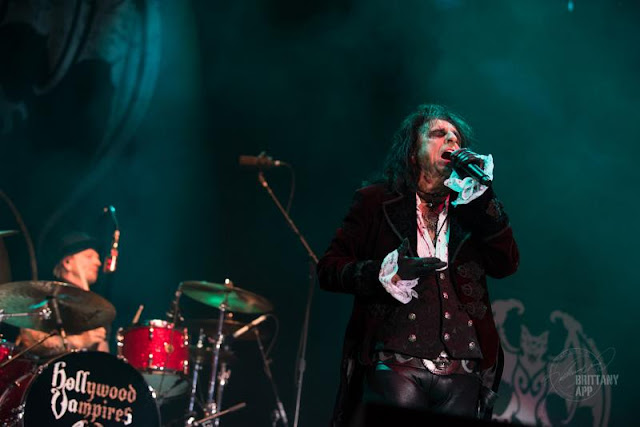 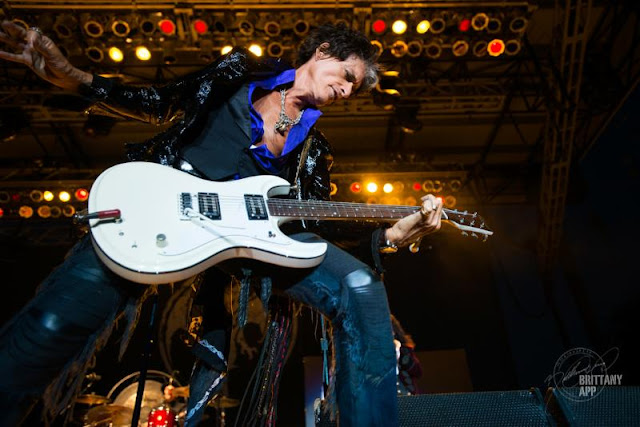 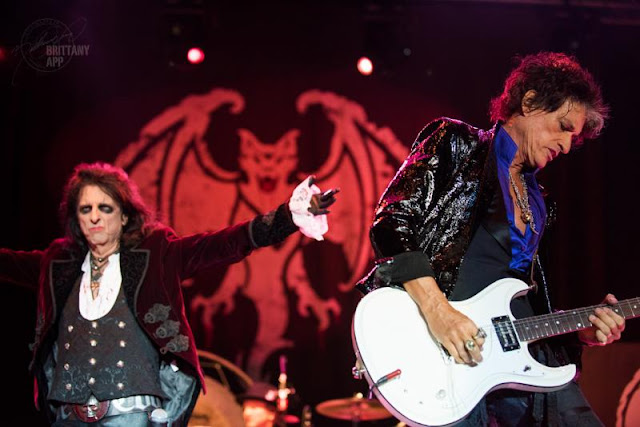 Joe looked a little gaunt but seemed to have a lot of energy. Johnny did not look gaunt and acted like a regular musician. Alice had vampire bite marks on his neck.

If you've read some of my previous concert posts, you know I talk about my personal experience. The music is there, always, thanks to YouTube. I listened to two songs from the show I saw, but they really truly sounded better in person.

It often happens that someone next to me decides to be my new best friend. And I sure had one this night. She apologized for the empty seat between us, saying it was probably her fault because she had a single ticket. Actually, we had the ticket for that seat as we couldn't find a person to use it. She was so disappointed that Cheap Trick wasn't opening, her sister had seen them open for the vamps in Michigan. Her sister bought her the ticket and she drove 2 and a half hours. She had pictures of Alice from a long ago meet and greet and waved around a blowup of one during the show. She eventually bonded with her other neighbor instead of me. I was surprised when she left towards the end of the show but I think she was making her way to the front in hopes of Alice spotting her and her picture.

We had a fun time.

Posted by smalltownme at 5:46 PM 3 comments:

I was going to title this post Brain Farts, but imagine all the weirdos who would search it! Like me, googling brain fart for a picture or definition.

You know those senior moments when you are doing something you have done a hundred or a thousand times and all of a sudden you don't know what you're doing.

Clearly I worked a few too many days because the brain farts were multiplying. Although I am not the only one to have suffered!

I am still tired and in a bit of fog this weekend, but I have hopes of it clearing.

chiefly US informal
Posted by smalltownme at 4:36 PM 2 comments:

There and Back Again

Well, hello.
Yes, I did go on an amazing road trip. I have tons of pictures. And I did take the sewing machine and hem Ernest's curtain.
But since I returned I have been working a lot, covering for co-workers who are having their own vacations.
I had a 5-day week, a 4-day week, and another 5-day week. It takes a lot out of me.
Hopefully things will settle down soon.
Posted by smalltownme at 6:27 AM 1 comment: