Life is more interesting when you laugh.

Driving home yesterday we had a hilarious discussion on how to survive the zombie apocalypse. Have we been watching too many horror movies?

The Handy Husband started it...as we drove out of the neighborhood, he said, "Look, zombie-proof walls! We'll have to come here in case of a zombie attack." Ernest had already formulated an elaborate plan to get weapons at Wal-Mart, and then hole up in Costco (for the food).

But I think if we stayed home we'd have pretty good zombie defenses:

Ernest can sharpen his ninja sword.

Frank would prefer the fireplace poker. He's also got my childhood baseball bat tucked away in a corner of his apartment. And there's a wooden washboard up there -- you could seriously down some zombies with that.

Handy's got a plethora of zombie-smashing implements in our garage. Just imagine.

All I could think of was my rolling pin but that would put me at pretty close range. Maybe I could whack them with my Mary Poppins umbrella instead?

But please don't worry about me. I've got the moves already -- I own this t-shirt! 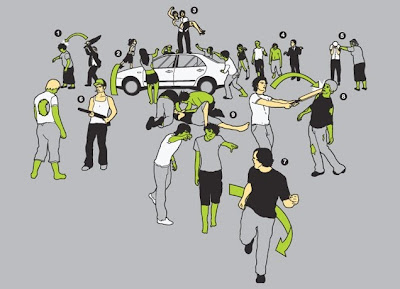 Zombie preparedness. It's a good thing.
Posted by smalltownme at 4:40 PM

well, you can never be too prepared ;)

Maybe along with Earthquake drills, schools should have Zombie Drills...
-Echo

You are so cool. And your kids rock!

I have watched Zombieland twice and I know the rules, too. Are you watching the Walking Dead on AMC?

You need guns, from what I've observed. Lots of bullets. And don't forget to "double-tap."

Apparently, if you "act" like a zombie a la "Shaun of the Dead" you can bypass brain sucking. For a few minutes anyway.