I found this recipe on Cooking Out of the Box (originally from Martha's Everyday Food) and it's become one of our favorites. I make it often.  It tastes a lot like Hasselbeck potatoes but it's easier and less messy. I have made it both peeled and unpeeled. I prefer peeled -- the potato edges are crispier. I've also substituted red onion for shallots when I didn't want to make an extra trip to the store, or because I had a pile of sliced red onions left over from tacos last night.

And I get lazier every time and I still don't wreck it.  Why bother to mix the olive oil and melted butter together?  The butter will melt on its own in the oven. And one could eliminate the butter if one was not a butter person. 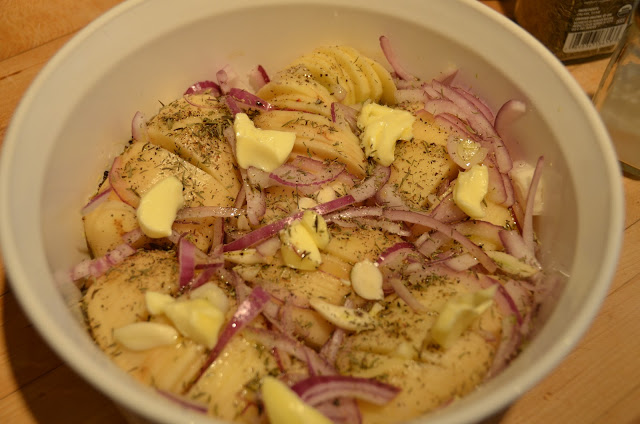 (That's not a tilt-shift effect.  That's a lucky outofthecamera shot.)

This batch is not quite as crispy as it could be, due to the delicate balance of cooking vs. chauffeuring*.  (I know many parents will understand.)  It's quite hard to uncover something at the proper time when you are miles away.  No matter -- it will still be delicious. 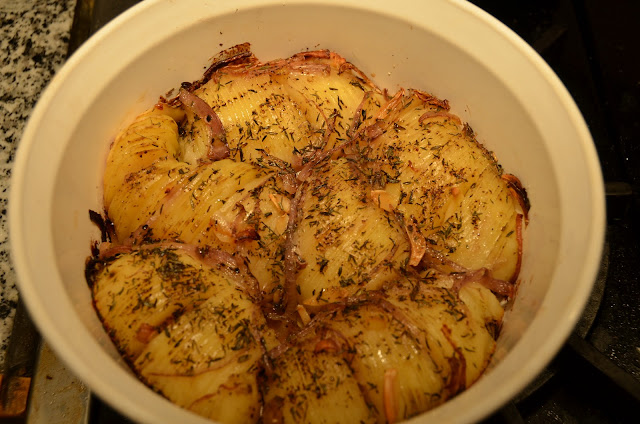 I'd dig in right now except there is still a husband in transit and the previously chauffeured* offspring to be picked up in about 10 minutes. 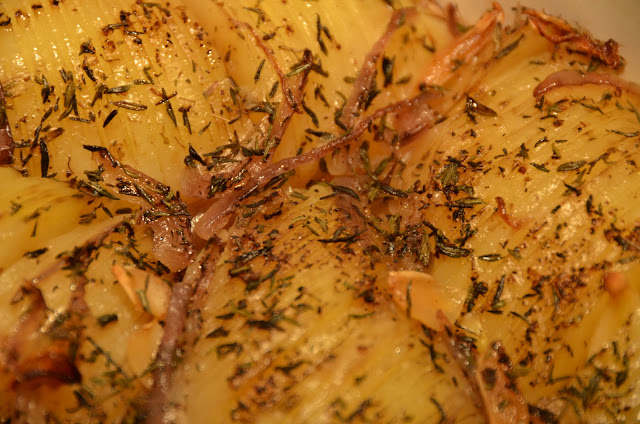 Dig in, dear ones.

*And I am desperately going to miss the chauffeuring (note to self:  2 Fs, one R) when the chauffeuree gets his license in April.
Posted by smalltownme at 6:00 AM

"the delicate balance of cooking and chauffeuring." That would be a cookbook I'd buy--seriously, the biggest issue facing dinner around here is my job shuttling people places when I'm supposed to be preparing food.

One time while chauffering my husband came home early and turned the oven off! He thought I had left it on by mistake...last time he did that!

I love Hasselbeck potatoes, you know, being Swedish and all. ;)

These look delicious. Thanks for the recipe.

*drool* potatoes in many forms...

I never have mastered "the delicate balance of cooking and chauffeuring."
Perhaps in your next blog post you can give pointers?