Kit Catson should have been my first pet. He showed up, a fuzzy kitten on the doorstep, on a warm summer night during one of my vacation visits with my dad. My memories are also fuzzy, but I believe he was offered tuna that first night. He decided it was a good place to live, even though there was already a dog in the house. The dog, a mellow Samoyed, did not seem to mind. At the end of the visit, my dad offered to give me the cat. (He may remember the story differently but this is my blog, isn't it).

My mother vetoed that. I won't go into her lame excuses as I'm not going to air dirty laundry here.

But she must have felt some guilt, for when my cousins' guinea pigs had babies she allowed me to have one. Frankly, a guinea pig is in no way an adequate substitute for a cat. Their quee quee noise is cute, but they are not cuddly and cleaning a pig cage is just as bad as a litter box. My pig was an albino and while I pretended to be happy about it, its red eyes spooked me.  It had a real name, but my mother and aunt were forever calling it the Pig.

As a farm girl from Minnesota, my mother thought it would be a good idea to have the guinea pig graze in the backyard on spring afternoons.  We had a wire pen for it, and a toy barn for naps.  Thanks to the magic of google searches, I have found the barn. 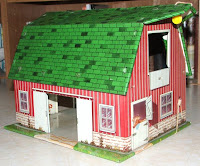 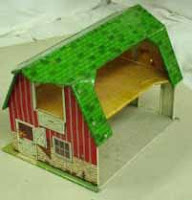 When I came home from school, my job was to bring the pig in and clean up the barn, which was usually flooded with guinea pig pee.  One afternoon, my mother stopped me before I went in the yard.      She had bad news.  The pig was gone, attacked by a cat.  She said.  It could have been anything.   (As an adult I know we have many kinds of predatory animals and birds around here.)  I was heartbroken.    And my mother forever after insisted cats were evil so there was no hope of ever having one.

What did I get instead of another pet? These two cheap stuffed animals. 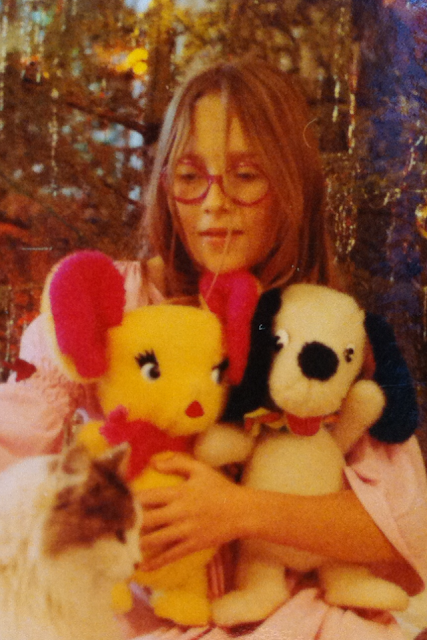 I had a parakeet when I was 20 and discovered I was not a bird person.  I finally got a cat of my own at 23 and I've been a crazy cat lady ever since.
Posted by smalltownme at 6:00 AM

That story makes me sad. I think cats are the most wonderful pets --so easy to care for, independent and yet cuddly --what's not to like? I'm glad you have cats now.

Having had a pig and a cat, the cat is MUCH more fun and MUCH less work.
Mine was named Scratcher and NOT albino, those eyes freak me out, too.

TRAUMA! BE A CRAZY cat lady and be proud!

This made me cry for the little girl who was you.