People are just so surprised about me sometimes. The gals at work (I'll call them Wisegal and Miss Spunky) were totally blown away to hear that I saw Alice Cooper and Bruce Springsteen in the same week. (Next month we're going to Ozzy Osborne, but that will be another story.) They started calling me a Banger Sister.

I had a really nice comment from a fellow blogger about Alice, so this is for you, Bunny Bunster. I've loved Alice Cooper since 1975. Welcome to My Nightmare. Apparently, other kids at my high school did too, because in 1976 this guy painted a mural of Alice on the wall of the yearbook room: 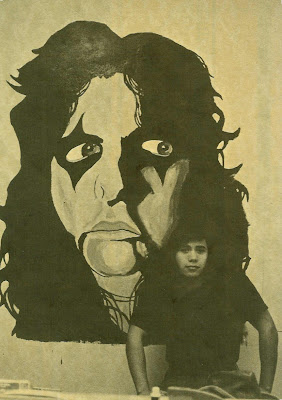 We ran wild on the yearbook staff that year. But the powers-that-be painted over it the next year. I never saw Alice in concert back then.

A few years ago we started taking our kids to concerts, starting with Weird Al and moving up to Van Halen, Aerosmith, etc. Gotta introduce them to good music. The HH and I started talking about groups we'd like to see. "I'm sorry I never got to see Alice Cooper, " said I. Lo and behold, Alice is still touring. Every year. Nearby. So we've seen him FOUR count it FOUR times, twice at the Greek Theater in Los Angeles and twice at the Ventura Theater slightly closer to us. He does the greatest show!

Posted by smalltownme at 8:29 AM

Now it is I that is sooooooo jealous! Aerosmith? Did you read my favorites??? They only way I want to see Aerosmith is Front Row Center, probably Vegas. That will never happen. But a gal can dream on, can't she?!
I did have an opportunity to see VH last month, but the timing sucked. I have seen DLR, though. I threw my panties at him!!
Johnny (Cougar) Mellencamp is from Indiana, and went to my University. He's one of our most famous Alumni's. He and David Goodnow. Vincennes University.
The best concert I can remember was ZZ Top. Totally kicked ass!!
I've got my Sonny Boy loving all the classic rock. He even told the kids on the rural school bus to sit down and shut up because an Aerosmith song was playing on the radio.
I agree, it is important to raise a solid music appreciation within our children! He loves Led Zep. too! And AC/DC.