It almost seems like I am still working since I am hardly ever home. Driving Mr. Ernest does get time consuming, although I do enjoy my afternoons. He had a day off yesterday, so I did too. Sort of.
We spent an hour waiting at the medical clinic to see the doctor for 2 minutes to confirm the red bump on Ernest's back was a blablabla hemangioma, and Ernest could either leave it alone or take it off. Since it's just going to get bigger, I voted to take it off.

I realize you need some backstory here. The night I combed out the dreadlocks snarls I thought it might be a good opportunity to trim his hair after his shower. When I felt his eel-like slippery tresses slither through my fingers, I decided it was not the time for me to attempt an amateur trim. "Let's make an appointment with a hair professional," I said. Oh yeah, I can pass the scissors buck baby!

However, I exposed his upper back for the first time in years. Even when he has his shirt off, the hair normally covers it. And there was a little bulgy red bump on his right shoulder blade. "We should have that looked at," I said, because I don't like to see mysterious bumps on my golden child, and that's yet another story.

So we had to schedule another appointment next week for the bump-ectomy. The doctor said something funny like, "There Will Be Blood, " but I can deal with that. How many times have I taken someone to the ER for stitches? And Ernest won't see anything, since it's on his back.
= = = =
In the afternoon, Ernest was bored so he helped me with a cooking project. He juiced an entire watermelon in my handmedown* juice extractor for my Watermelon Jello project. Why am I making Watermelon Jello? Because I saw the recipe in Sunset magazine while we were waiting waiting waiting at the doctor's office. And since there was watermelon juice to spare, he made watermelon/strawberry/lemon/ade. Later I realized I could have saved the extra juice for Frank to make Watermelon Pie.
Oh well, I'm sure I can get someone to pulverize another watermelon. I got Ernest interested in the first place because I said, "Want to Gallagher a watermelon?" He was slightly disappointed that I did not hand him a sledgehammer.
= = = =
*I love my mother-in-law for many reasons, not just because she gives me the appliances she doesn't want anymore.
= = = =
Back to the jello... 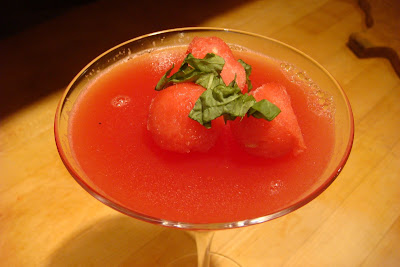 Looks gorgeous, doesn't it. Like something out of, oh I don;t know, a magazine? Sadly, it did not taste as good as it looked. I think it was the sugar. I thought to myself, "Self, why does the recipe have all that sugar when watermelon is so naturally sweet?" But we added the sugar anyways. I should listen to myself.
Posted by smalltownme at 9:30 AM

T.J.s is featuring YELLOW watermelons this week. Sadly, at the sample table, the slices being offered tasted yellow more than watermelon-y.
M-I-L

You crack me up! Thanks for taking one for the team on the watermelon jello experiment. I was considering making it too after seeing the recipe. My inclination would have been to skimp on the sugar too.

shrink on the couch said...

Too much sugar? Is that possible? Looks deelish. I am in awe of your watermelon prowess.

Incredible! That looks great!
I hope there is very little blood in the bump removal.

i want some! i'm planning on creating a watermelon centerpiece soon. my daughter rolled the first one off the counter!

You're making me think that I need to pull up my girls' hair and check their necks and shoulders.

Mmmm. We made a watermelon chiffon pie last summer. Tasty!