In the ongoing saga of my refrigerator, in which first the ice was melting, and second water was collecting under the vegetable drawer...

The water continued to collect, so Handy took things apart and found a drain pan with a rusty hole in it. The water was going through the hole instead of through the tube to wherever it was supposed to go. He replaced the drain pan.

Then the fan area started freezing up. We would end up with frozen lettuce while the rest of the refrigerator got hotter.

So we called in a different Mr. Appliance Man.  He hadn't ever seen this problem before. And our refrigerator somehow isn't built like other refrigerators. He was a good guy, though. He went off and did some research and contacted GE and other repair people, then came back to say, "It might be this $20 sensor."  He replaced it and it's been working fine for a month! We think we'll stick with this guy instead of the other one! 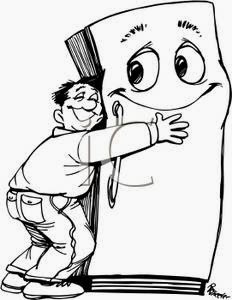 If you find a good repair guy, keep him!!! Not in a creepy, Kathy Bates way though. I fear our refrigerator is on its way out. If past history is any indicator, it will go on a major holiday.

When my ten-year old refrigerator was being recalcitrant and I mentioned it to my beloved car mechanic, he actually drove over and diagnosed it (turns out a motor is a motor!) and then when the part came, came and installed it for me.

You can bet, I'm keeping him!

A good repair person is such a precious thing to find!