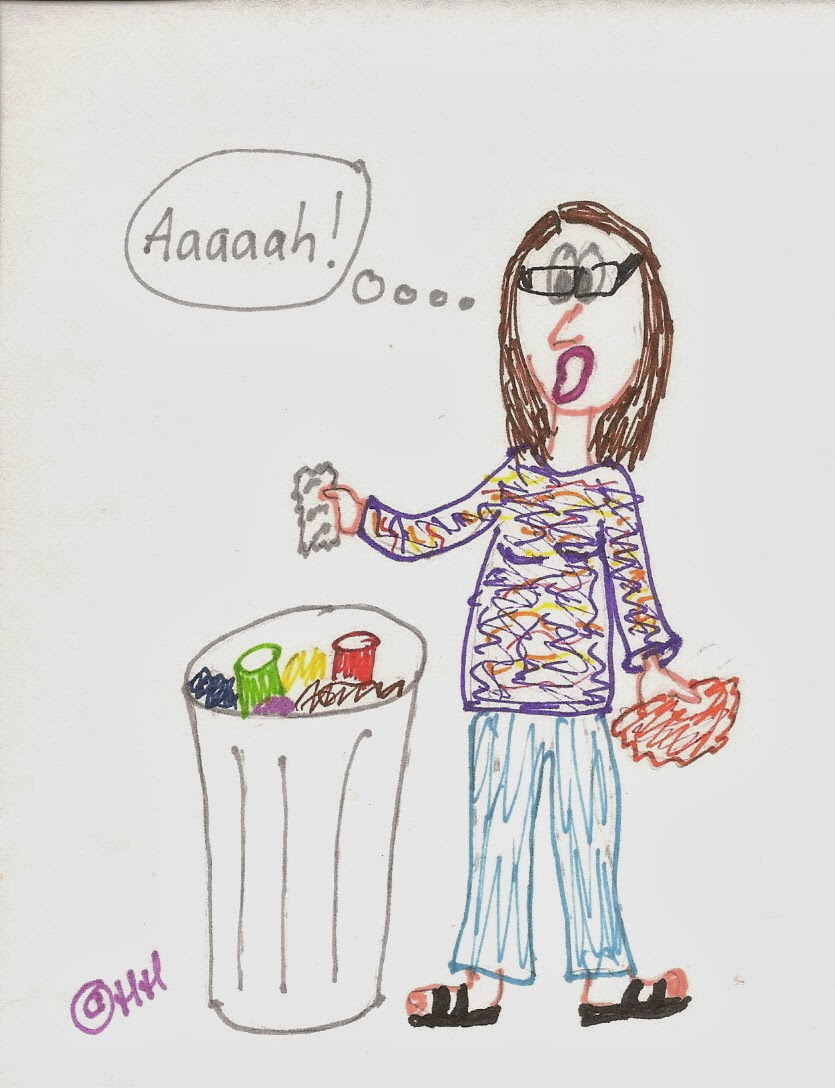 Not picking up after oneself is such a pet peeve of mine. When I worked at the school, it was a constant battle to help the children remember to pick up after themselves. Or to be kind and pick up something someone else had dropped. Imagine a hoodie, fallen off its hook and kicked around in the hallway. They would march right over it. I would say, "You know you're stepping on it. Why don't you pick it up and hang it on the hook? Wouldn't you like it if someone did that for your hoodie?"

I wrote a college psychology class paper on The Development of Altruism in Children, but it seems like it developed faster back then.

And the trash. "It's not MY trash," they would whine, as I asked them to pick it up. Here I got a little mean. "I don't care. It's not my trash, either, but I still pick it up ALL DAY LONG because you guys drop it and ignore it.  Please pick it up and make the world a better place."

Sigh.  Felix's rant over for now.

Update:  The Washcloth collector is showering in his own bath now (because he's too tall for our showerhead) and seems to be reusing his washcloth.
Posted by smalltownme at 6:00 AM

GAH! is right. I feel some days like all I do is pick up after other people. How on earth does one train others to be more aware?

A mom-friend and I were just talking about this! How do kids walk right by (over, on top of) stuff and NEVER do anything about it? It's honestly like they don't see it. I know it's our job as parents to train them, but I have a feeling they don't really learn until they move out.

On a related note, when my two sisters and I were sharing a house (we were in our early 20s), the youngest would honestly step out of her clothing and leave it in a pile. My older sister and I started picking it up and collecting it in black trash bags. Took her a while to realize her clothing wasn't being recycled back into her closet.

I watch a young girl, 12 ish..., drop a used Kleenex and keep on going. I did not pick it up. I might have if I had been wearing gloves.
I was then almost run over by two kids walking with their family. My pet peeve is walk on the right. We were talked to walk on the right. Now I play the game of which way are we all going.

the slobs and pigs are EVERYwhere!

thank you for picking up. I do this too and it drives me crazy. I'm always picking up backstage, mopping up puddles of water off the sink, turning OFF the faucets (really? that's so hard?). I'm not a neat freak but trash being thrown around drives me totally nuts. Don't even get me started on dog poop!

Have you seen this??? So good! https://www.youtube.com/watch?v=nNXG8AxqJuU

I tend to mop up in the bathroom (my own, at work, and anywhere else) because the mess drives me crazy.

Just please don't look in my bedroom. I am married to Felix and my side of the room is driving him crazy!

Not pushing in chairs is mine. Why, people, why?