The first time I remember visiting my dad's house, there was a tall stack of cardboard bricks. I built forts and castles, but it was especially entertaining when I built walls and my dad jumped over them. Do it again, Daddy, I cried with delight.

As I outgrew toys, the bricks were pressed into service as bookcase supports. My dad needed a lot of bookcases! They were sturdy and tough and did their duty for many years. When Grandsons appeared, the original bricks were so busy that a substitute set of bricks were sent. Those bricks were well used, and went to live at a pre-school some years later.

I inherited the original bricks, and they are still working hard almost 50 years later! 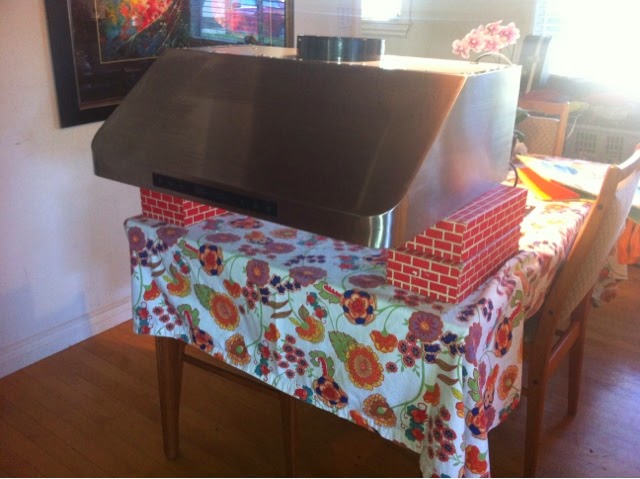 We replaced our range hood because the old one, poorly designed, was leaking grease and had the annoying habit of dropping parts...either onto my head or into whatever hot pan I was cooking. After the last near miss with a pan full of bacon grease, I was done with it. Handy hunted down a replacement. The bricks were so helpful with the installation. 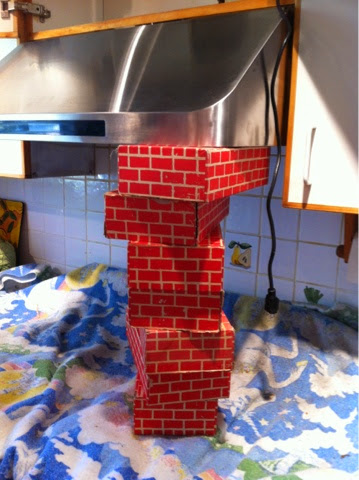 (Why yes, doesn't everyone have a unicorn blanket drop cloth?)

Hey bricks, I could sure use some more bookcases.
Posted by smalltownme at 8:19 AM

Ha! I love that you used the bricks to install your new hood. Great idea!

I love the history of the bricks. So cool that they're still holding up. PUN INTENDED! What?

Bravo for finding an alternative use for children's toys!

I loved those cardboard brick blocks, but we never had them at our house. We had wooden blocks. Then when I had kids, my parents bought wooden blocks for their grandchildren. I found out just how much those things hurt when you drop them corner-first on your foot.

Oh, I just got rid of ours--my kids went through TWO sets--played with them so relentlessly. I found out that I did, too, at their age. I never knew my parents replaced them. Wonderful toy, those cardboard bricks. Nice job repurposing.