Standing on a wobbly step ladder with my head in the peach tree, I was outraged when Handy came up and began to squeeze the poor little peaches.  I would have slapped his hand if I had been able to reach him without toppling off the ladder.  "Stop, you'll bruise them!" I cried.  He wouldn't want a bruised pie, now would he?

Oh this is crazy!  I just googled "bruised pie" and there was an actual recipe. And another for "bruise pie" too. Adjective vs. noun?

After pushing the peach envelope yesterday, I thought I should go back to the classics.  So here's the pie. 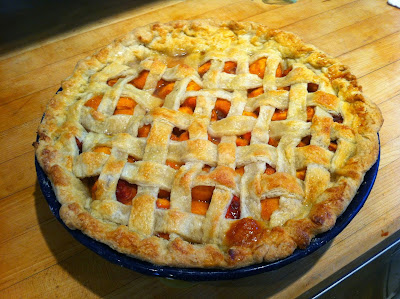 Double crust from your favorite recipe.  Mrs. G told me her daughter's pie crust trick but I didn't have the necessary ingredient. I don't want to give away any family secrets without permission!

Peach filling.  I filled up the pie pan with peaches to gauge the right quantity, then dumped them in a bowl and mixed them with sugar, cornstarch, and Frank's secret ingredient.

The appetizer for the pie was another classic meal, homemade hamburgers and oven fries. 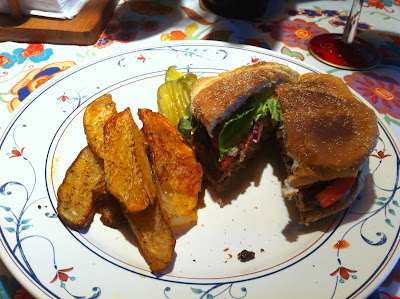 I did make peach bread yesterday :-)

I have never made a pie with the lattice top --it looks so pretty!

That is a beautiful pie. I am envious of your lattice-making skills!

DANG, are you kidding?! No complaints :)

All this talk of "secret ingredients" but no one will share?