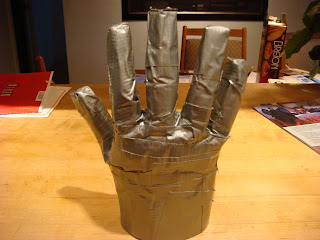 Frank was bored during Physics today. (Since he took Physics last year, he is TAing this year.) Apparently someone else was bored too. So they made a duct tape glove over his hand.
Maybe by the end of the year I will have an entire duct tape son, to stand in for Frank if/when he goes away to college next year. It would be durable and would never have to shower. I could put a wig on it if I missed his hair. But even though Frank doesn't talk a lot, I would miss his sense of humor. So the duct tape son would need some kind of sound-bite system. Frank is also taking a computer class...he has all year to figure it out.
Posted by smalltownme at 6:39 PM