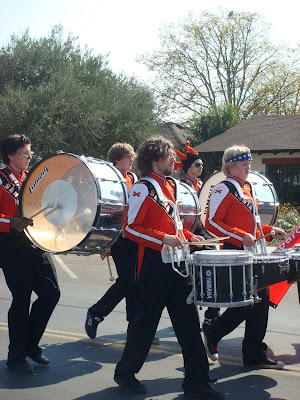 Frank has played the saxophone since sixth grade. This is the first year he hasn't been in Concert Band, due to a scheduling conflict with AP Calculus BC. So he signed up for Stage Band. Twice a week they noodle around on guitars, bass etc, and twice a week they do drumline.

Frank avoided percussion before this. In sixth grade, he broke his arm and the cast got in the way of of a saxophone key. This was the week before the 4th of July parade. His teacher said he could play percussion, but he wasn't interested. Six years later...here he is with a drum in Friday's homecoming parade.
Speaking of homecoming, as I posted earlier, the Handy Husband and I celebrated our 24th wedding anniversary on September 24th. However, we'd been going steady since the fall of 1977. So I could date our "original" anniversary around the Homecoming dance. How about 30 on the 30th!?!?!
(I'm irritated this isn't displaying like it looks when I preview it. I can do better layouts then this. I was yearbook editor, for ___'s sake!)
Posted by smalltownme at 5:15 PM