6:22 p.m., Pacific Whachahoosit Time (please, do we set the clocks back soon because it is eerily dark in the morning???). It WAS 6:22 before I tried to upload the pictures which took a while, and then I lost something and had to regroup. Live blogging is not for me. I've got a massive internal edit function.
So... some time later..
The doorbell rang, and I found Tolouse-Lautrec at the door. 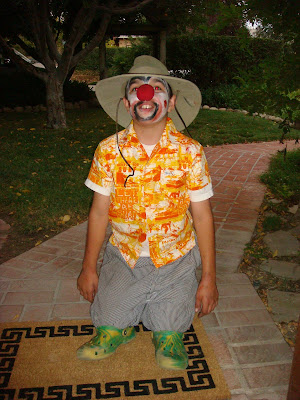 Truthfully, it was my nephew McQueen on his knees without the shoes. I reposed him with the shoes for greater theatrical effect. Because I'm that way.
McQueen and Ernest left for the haunted house. With a cell phone, just in case. But they are brave, unlike me. And McQueen's among his own kind (clowns).
Here are the intrepid adventurers. 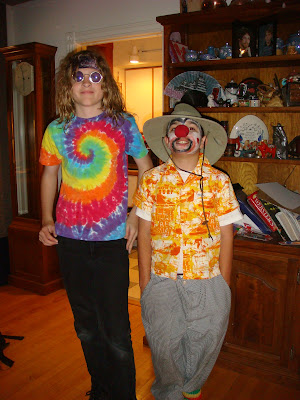 Trick or treaters are slow right now. One group at 5:45, the next didn't appear until 6:15. Ernest is hoping for leftover candy because I bought a lot of chocolate.

OK, I've finally finished this (after a pizza break) at 6:35. No new trick or treaters.

Train Guy makes a great bee; must be something in the genes.

Horn Guy looks great, too. I'm glad he resembles his dad, and we'll hope he dodges the follicle challenged genes.

Tomorrow is Saturday and you can turn back the clock.
Yea!!!!
m-i-l

Ernest is one cool guy.

I ran out of candy by 5:30 last night! I was not expecting so many trick or treaters!