You may have noticed a lack of concert posts from me this summer. That's because we blew most of our so-called "concert budget" on a big one. Some of us have seen Aerosmith. Twice. But one younger family member has been completely irritated because we left him home both times. (It was too loud for him before! That's my story and I am sticking to it.) Then a recent tour was cancelled because of Tyler's throat surgery. Finally having scored some really awesome seats through the fan club, you can imagine we were desperately horrified a little concerned when this happened:

We heard the Canadian concerts were cancelled, but so far have heard no bad news about the shows in our area. Today, a package arrived with what I call our "Aerophernalia" -- lanyards and passes, t-shirts, pins, postcards, oh, and a box of Aerosmith pens that didn't make it into the photo. 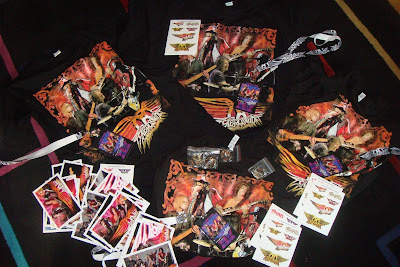 So wish us luck. Or more importantly, wish Steven Tyler a speedy recovery!

What's crazy about this? The concert is the night before school starts. 3.5 hours away. (Why didn't I get tickets to the Staples center on a Friday night? I don't know... I thought this was a Saturday when we were buying the tickets. And we wouldn't have gotten such great seats at the Staples Center.)

I think this is just how life is supposed to be. Do it! Yay!

Argh. Cancelled. On the bright side you won't be tired when school starts.

Sorry Aerosmith cancelled, but Green Day? Can I come?