The Diary of Anne Frank is in the news. Not having read the new version in question, I can't comment about the new inclusions that might be offensive to some. I do wonder why the school knee-jerked and pulled it on the basis of one parental complaint, rather than following their normal procedure. And then I also wonder, did they upgrade to the new version without reading it first?

Ernest read the older version last year in 7th grade, and was able to visit the Anne Frank House in Amsterdam on his trip last summer. Entering the museum he said he "went through metal detector like a security line in an airport." The actual diary is on display, encased in "something like bulletproof plexiglass." This is a replica that they were allowed to touch. 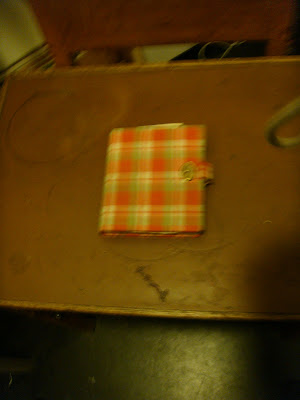 Ernest bought a copy of the book at the museum. "I don't think I'll ever read it again, it was just something I wanted to have." Hey, I can read it now and see what the fuss was about.

(Photos and quotes by Ernest.)
Posted by smalltownme at 6:00 AM

Oh, people. I just wonder about them sometimes.

This is the first time I've ever seen what the actual diary (or a replica of it) looks like.

As for Culpeper Co., VA (an hour north or me) banning the newer version of the diary, I am embarrassed that those people are from my home state.