A Whole Lotta Scaping Goin' On

There's been some "scaping" around here.

First, there was a bit of landscaping. The 40-year-old two-thirds dead pear tree decided to fall over. Not a surprise, since the dead part was termite-ridden. 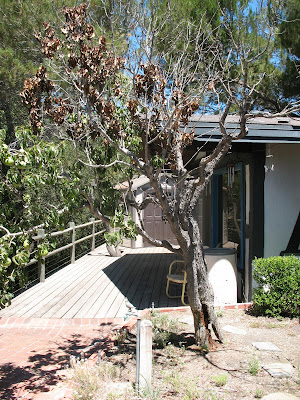 The Handy Husband cut it down, but we were left with a bit of a stump. 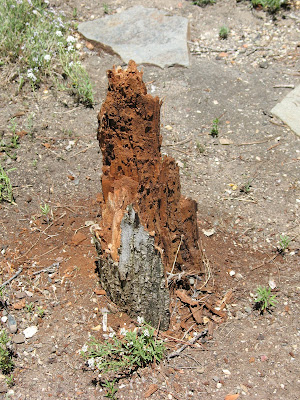 I didn't want to have yet another stump lying around, because I want to put in another fruit tree. Since Ernest's stash of cash was running low, I suggested he dig out the stump and then I would pay for the video game he wanted. So he did...it was an ordeal but he plugged away with his dad's help. After they dug down knee-deep and chopped through 3 giant roots, we now have a large hole in the ground. (Size 11 feet in there for scale.) 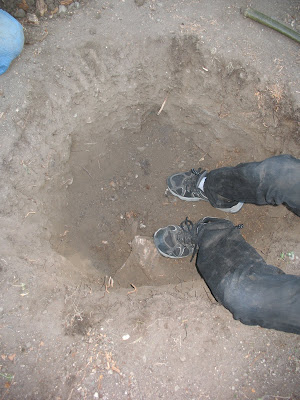 Knowing nothing about gardening, I wonder...would it be better to wait until winter and put in a bare-root tree? Perhaps my ultimate gardening friends could weigh in here? Handy wants a red apple, Frank and Ernest want green, so the compromise might be one of those with grafted limbs? And nephew McQueen weighs in with a desire for a pomelo, but citrus tends to freeze here in the winter. Ernest would also like a pomegranate, but I think they're too bushy for the space. He can have one further out in the yard, if he digs another hole!

On to the next scape... There was a bit of manscaping. Frank got contacts. He's got gorgeous eyes. It's nice to see them a little better. He also got a haircut. 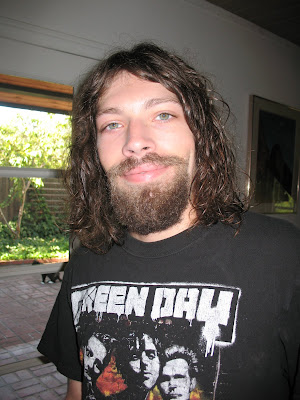 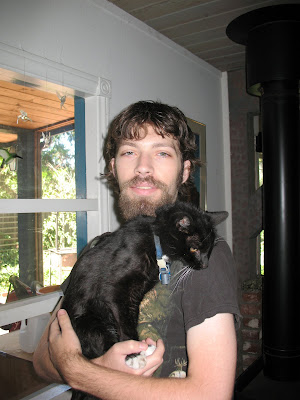 Any other scaping going on? Moonscaping? Seasacaping? Escaping? Please tell me about your escapes, because I've got to go back to work tomorrow morning.
Posted by smalltownme at 7:03 PM

Hmm, I love to garden but I know zip about gardening in Calif. In Maine, we plant trees in late spring or fall, when it's cooler.

Wow what a difference a haircut makes! He does have beautiful eyes.

I'm not sure about the best time to plant trees in your zone. You might ask at a garden shop.

As for apples, do you have another one nearby, because you'll need two if you want fruit.

I wish my son would cut his hair, too. His is curly and bushy.

Yum, apples. I think in CA you can plant in Spring or Fall.

I can't help you with the gardening question, but I will give a thumbs up to the contacts and manscaping!

Whenever I see a pic of him I wish he was at a college with No-Shave November--he would so rock that!