I used to write about each concert we went to, but I haven't been to that many this year.  So it's all lumped together.

I went to the concert of a lifetime last fall, Barbra Streisand at the Hollywood Bowl.  And I thought about seeing the Rolling Stones on my birthday, but four tickets from StubHub plus hotel, food and gas would have put a serious hole in the budget.  So maybe next time.

Handy and one of the lads saw Steve Miller. And they scored again when his sister won tickets to Robert Plant and decided not to use them.  Frank of course goes to things on his own, like a metal thing at the House of Blues. 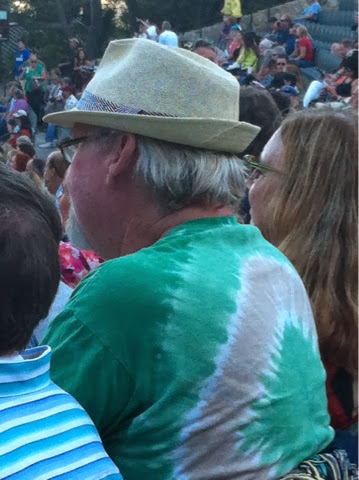 I did make it to Heart and the Jason Bonham Experience. Great show!  The Philip Seymour Hoffman lookalike (above) knew all the lyrics.

And the Avett Brothers!  I discovered them on the Grammy Awards one year.  They were backing up Bob Dylan.  Bob was past his prime that night but the Brothers were wonderful.

More doppelgangers in the audience at that show: Adam Savage's double sat in front of me, and remember the smoke monster man from Lost? He was next to Handy.  Too close to take stealth pictures, though!

Here's 13 wonderful minutes of the Avett Brothers. Kickdrum starts about 3:22. OMG the cellist, I love him!


Happy Listening to whatever you love!

Posted by smalltownme at 7:43 AM

I so love Heart singing Stairway. Her voice is so clear, and the guitars just nail it! LOVE LOVE LOVE!

Oh my. That is great. I can not remember the last time I went to a concert......

shrink on the couch said...

Heart's rendition of Stairway to Heaven was amazing!