I recently read an article about a couple naming their baby after the car in which she was born.  I had a laugh over that, because my mother always told me that if I had been a boy, I would have been named after my parents' car.  Not Bug or Beetle or Volkie but Craig, after the car's license plate letters which she said was KRG.

But when I came across these old pictures and saw a different plate on them, I thought perhaps that was a tall tale she was telling me.  However, thanks to a Facebook thread from my father's cousin, I found that California regularly issued cars new plates until 1963.  So her story holds up, after all. 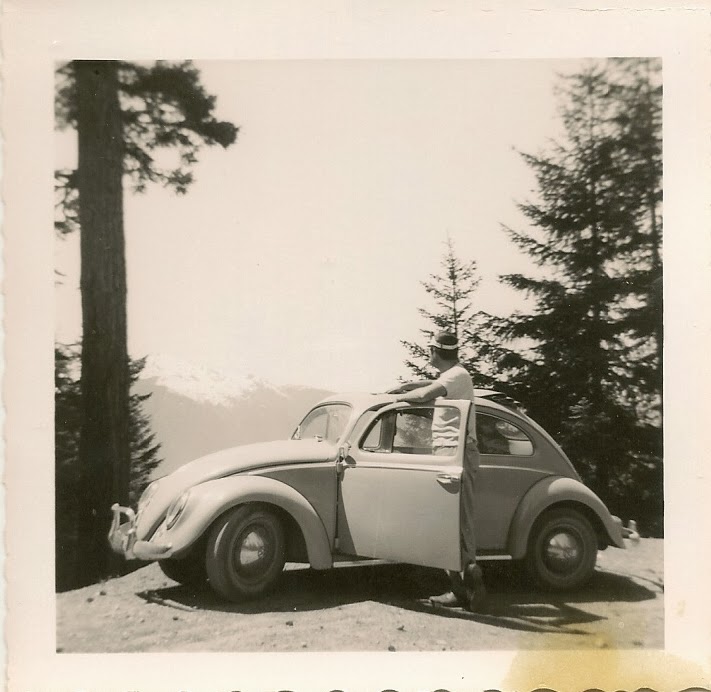 Here's the car's story, from my dad's autobiography:

One of my friends suggested that if we wanted a small car, we should check out the VW beetle.  The salesman handed us the key to his personal VW and told us to bring it back in a couple of hours.   We took the car and wrung it out.   It was fun and agile through town, but slow when we drove up Highway 24 through the Orinda tunnel.  The best it could do up the hill was 45 mph in third gear.  That was disappointing but it was another story entirely when we turned off the freeway right after the tunnel.  We went up Fish Ranch Road, and then along Grizzly Peak Boulevard.  Wow.  I had never driven a car that handled so well.  We were passing all the American cars.

Before we bought the Beetle, we checked other small cars.  There was no Renault dealer in the area.  The Morris Minor dealer took us for a ten block ride, but didn’t offer to let us drive.  The Austin dealer took us on a very sedate drive, then let me drive it the last few blocks back to the shop.  I could have insisted on doing more driving, but after even these short rides we could see they were both stodgy, and neither measured up to the VW.

The Nash Metropolitan had just been advertised, so we went to the Nash showroom in Richmond.  They had a display model on the floor - minus the engine - if you can believe that.  It was ugly, too. The salesman didn’t have a car to test drive, but he offered to take our order for a car.  You can guess what our answer was.

We went back to Berkey-Lee Volkswagen and put in our order for a beige car with a sun-roof.  It cost roughly a dollar a pound, about $1600 for 1600 pounds of car.  We financed it through the Credit Union and waited impatiently for it to arrive.  VWs were shipped from Germany on a boat that unloaded in San Francisco.  I heard the salesman briefing someone on where to go to take delivery.  Cars were shipped with empty gas tanks.  He told the driver to board the boat, put the car in neutral and coast down the ramp to a gas station on the nearest corner, then put in a gallon of gas, enough to get the car back to Berkeley.  Berkey-Lee was a no frills operation.

The car we ordered was advertised to have twenty-four horsepower.   One of the best things about the VW is that they didn’t have to come out with a cosmetic change for a new model every year.  Improvements weren’t announced with the hoopla of a new model.  A very nice improvement was that our car was one of the first with thirty horsepower, a very nice improvement.  This was thirty DIN horsepower.  A few years later VW started advertising SAE horsepower: 30 DIN was the same as 36 SAE!

My VW was the hit of the day when I drove it to work.  I gave demonstration rides at noon for days.  It was a fun car to drive, and cheap to buy and operate, but it did lack certain amenities. There was no gas gauge.  Instead the gas tank had a one-gallon dimple in the bottom.  When the motor stopped for lack of gas, there was a foot-operated lever to switch the gas line to the very bottom of the dimple.  Then you had thirty-some miles to find gas.  There was no air conditioning, not with only 30 horsepower to drive the car.

You could pack an amazing amount of stuff in the car.  With only two in the car, you could take out the rear seat and seat-back.  The passenger seat was also easily removable.  With the sunroof open, quite bulky things fit in the car, including Christmas trees and ladders. 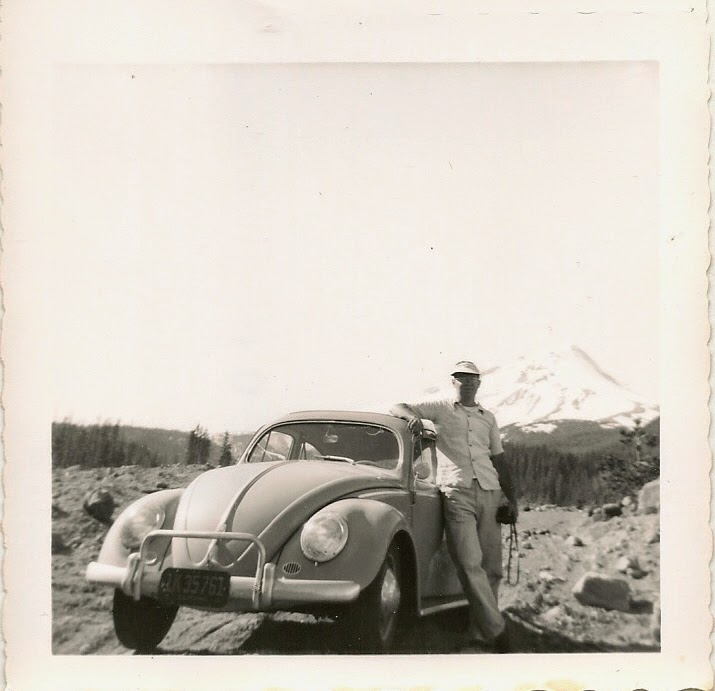 Early in the summer of 1954 we took our first long trip in the VW, driving and camping along the coast north to Olympic National Park and then taking the ferry from Port Angeles to Victoria on Vancouver Island.  More than fifty years later they are still using the same ferry, the Coho, on this line.  All along the way, ours was the first VW people had seen.  Every place we stopped, people clustered around us to inspect the car.  We had to (were eager to?) open both the front trunk and the rear engine compartment.  It was the right choice for us, fun to drive and reliable.

In the 1950's the typical American car had a soft suspension that made it quiver like a bowl of Jello.   To negotiate a sharp turn in the mountains, the driver had to slow almost to a stop.  Once around the turn, though, his overpowered car accelerated much faster than the VW could.   It seemed to be a point of pride for the driver of a big car not to use a pull-out to let a little VW go by.  I developed a rather dicey passing technique that worked, or I wouldn’t be here writing this.  I am not recommending it.  Not only was the VW faster in the bends than American cars, it also had superior braking.  I would hang back a little, then accelerate as the next bend loomed.  When the driver ahead hit his brakes, I made my decision. If the road ahead was clear, I had enough speed to pass.  If a car was coming from the opposite direction, I could brake and drop behind again.  I never had any close calls doing this, but then I never met a VW driver coming from the opposite direction and using the same technique.   I probably made a lot of enemies with this technique.  One time I passed a hot car coming down out of the southern part of the Sierra Nevada.  We were about ten miles out on the flat when the car I had passed came roaring by.  We were doing 65 mph, and he was doing well over ninety. 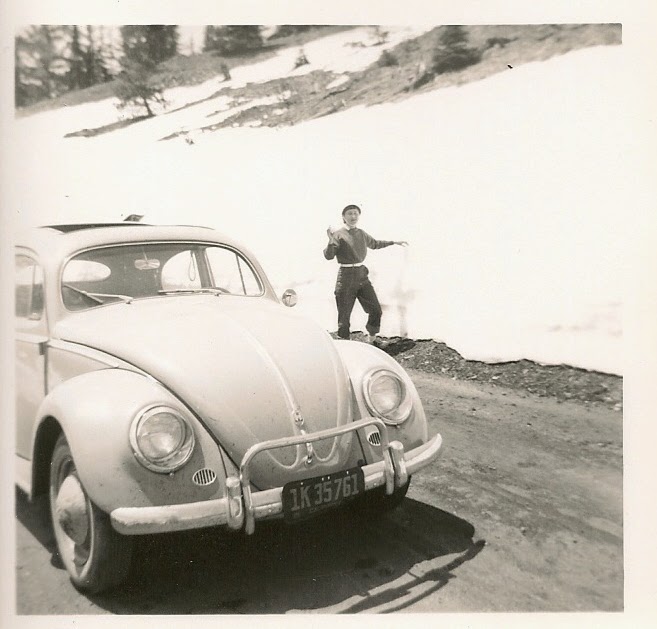 Posted by smalltownme at 9:21 AM

I loved the story, too, thanks for sharing! Around 1964 or so, my brother had a baby blue Bug. It made the trip many times to Utah and back (pretty slow across Nevada!) until my sister totaled it by falling asleep at the wheel. What cool cars those old bugs were!

My parents had a VW in the early sixties, when I was a little kid. I remember curling up in the "rumble seat" --behind the back seat, below the back window. We'd put pillows in there and both my sister and I could fit and had a comfy ride. No one bothered about seat belts then.

I really enjoyed your father's voice in the excerpt!

My grandparents had a VW that they drove to Mexico. It was a treat seeing these photos and reading the story. Thanks!

What a storyteller!
My folks drove a VW Beetle until late in the '60s when my mom hit black ice and totalled the car. She had been wearing a seatbelt and walked away with bruises but she didn't trust a Beetle after there.
However, I've always wanted one.

(Some folks said our firstborn should have been named Austin or Antonio.)

no gas gauge! Great story and pics though :)

In the 50's I rode to work in an early Bug with three LARGE men--we were the most efficient carpool in the country. I myself have driven VWs since 1980 and won't even look at anything else.