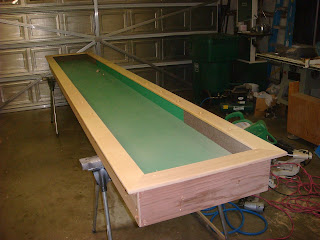 The Jolly Green Giant is being assembled in my garage. What is it? Three guesses.

A litterbox for a herd of cats? A mini bowling alley? Gumby's coffin? Nope. Give up? A new base for a shuffleboard game. The handy husband's employers acquired one from a defunct bar. While the varnished shuffleboard and equipment were in good shape, the base was trashed. Too many drunks leaned on it? So they asked him to make a new base. Why green, you ask? Why, to match the company's pool table and foosball table. Yes, it's THAT a cool place to work.

I forgot to mention: The Jolly Green Giant is FOURTEEN FEET LONG!

Frank helped the HH lift some heavy stuff, but Ernest spent the whole weekend with his dad, even getting to use power tools (pony tail for safety): 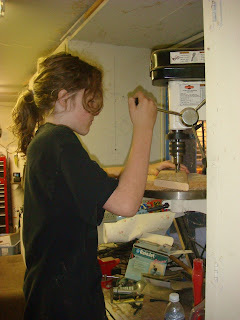 Ernest worked so hard all weekend he earned himself a pair of Heelys of his very own!

Tomorrow I might get my garage back. The Jolly Green Giant is moving to the empty garage of our rental house (no, I'm not a real estate mogul; it was my late mother's house) for finishing. Ho ho ho! Or is the JGG forbidden from saying that just like Santa?

Posted by smalltownme at 6:24 PM

I can just sing, GREEN GIANT right now! I was going to guess skee ball. And yeah, sounds like a very cool place to work.

Foosball? Shuffleboard? Sounds like a great place to work!