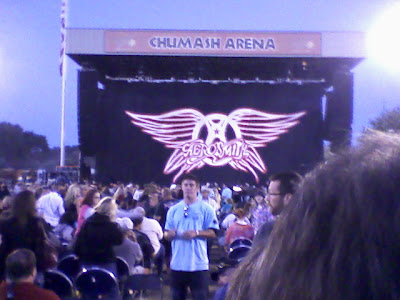 After the previous year's debacle, we finally got to see Aerosmith last night. Believe me, we were plenty worried to hear about Joe Perry's motorcycle accident last week.

A whole bunch of my friends took their daughters to Justin Bieber a few days ago, and I was glad I had sons so we could see the anti-Bieber. And they were Cocked, Locked, and Ready to Rock, as their tour slogan goes. Steven looked great in his skin tight yellow spandex pants, which were tight enough to tell that not only was he cocked and locked, he was also sporting the male equivalent of camel toe, moose knuckles.

Since the venue was at a county fair, pungent aromas wafted through the air. What, you thought I meant the herb? No, I meant MANURE. Whoo-eee, what a strong aroma.

I think Sammy Hagar's been opening for them on the tour, but he got his own night at the fair (I wish I'd gone...). The opening act was a local group who'd won a radio station contest. I thought they sounded good, but my musician children said they were boring: "They always played in the same key and time and only used 8th notes." 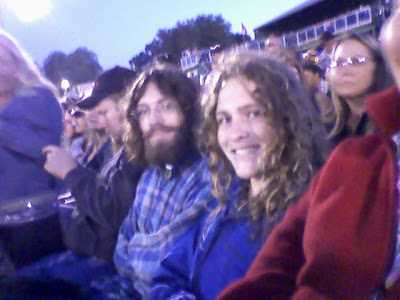 Fortunately, they liked Aerosmith better. The music was great, of course. Here's the setlist, if you're into that. For all the animosity that was going on in the band last year, they seemed pretty friendly, with Tyler hanging all over Perry. It was fun when Perry duelled his Guitar Hero avatar and won. 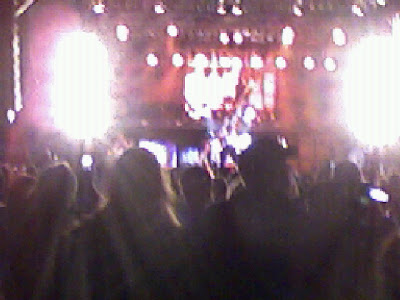 (Bad pictures, I know. We REALLY need to replace our obsolete cell phones.)
So Ernest has FINALLY gotten to see Aerosmith--cross that off the kid's bucket list.

What concert's up next? I think it's Rush again in August, plus I am dragging the handy husband to the Americal Idols tour so I can see Crystal Bowersox. We saw Peter Frampton and Yes a few weeks ago, but I haven't written anything about that yet.

Turn it up!
Posted by smalltownme at 3:14 PM

I love Aerosmith. I am a guitar rock chick all the way.

i'm with Mom on the Run....rock chick here, too.
I've loved Aerosmith since I was about 15....favorite 8-track tape!! (yeah, i know obselete but...what memories those tapes were, huh?;-)
Glad the concert actually happened and that it was great!!!

Jason, as himself said...

I'd love to see Aerosmith live! They're awesome.

I was just reminiscing with a friend on FB about a Scorpion concert back in the 80s--we had totally forgotten we went together!

I love all you rock chicks and dudes!

Thanks for this great Aerosmith information !
You better buy Aerosmmith concert tickets before they gone !