Out of the Woods

Ernest has returned.
The hair -- After a shower and lots of conditioner, he got it subdued down to three snarls which he asked me to help with. I mentally named them Baby Mat, Mama Mat, and Papa Mat. Papa Mat took a lot of work and a tiny snip of the scissors. 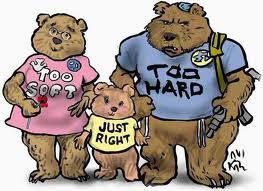 And speaking of bears, Ernest can now tell you how to shit in the woods. Without toilet paper. 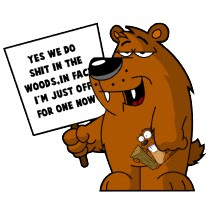 His group had all the fun, including a broken-down car and a rattlesnake. There was rock climbing, backpacking, rafting. He was alone in the woods for 5 hours. (Not lost, it was one of those empowerment things.)
He's off on a bike ride now, and then we're going to a wedding!
Posted by smalltownme at 8:35 AM

I'm surprised that his hair wasn't worse. That's awesome he didn't have cut any of it off.

As for defecating in the woods... I just don't even want to know.

Glad things went well. Sounds like he's learning good survival skills! WE taught my sons how to poop in the woods at a young age--I guess I was SO effective at it because I had to then train them NOT to do it in my yard.

I'm just curious. If he HAD taken a brush along, would that have helped you avoid the mat removal?

Jen, just because you said you didn't want to know perversely makes me want to blog more details!

Green Girl, we have a seasonal creek in our backyard, dry most of the year. Many years ago we told the older son he could pee in the creek. One day, he pulled down his shorts and started to poo on the bank...oops!

Linda, I think a brush would have helped but only if he remembered to use it.

Did he really cut it? Wow!

Oh, and just make sure if he does his business on the creekbank, he's careful choosing which leaves to wipe with. Poison oak is a bitch.

The hair is intact. I just had to snip one tiny strand that wouldn't untangle.