Here's Frank, roaring (Literally. He roared a lot, like a Maurice Sendak wild thing: "And they roared their terrible roars...") on the first day of kindergarten, way back in September 1995. 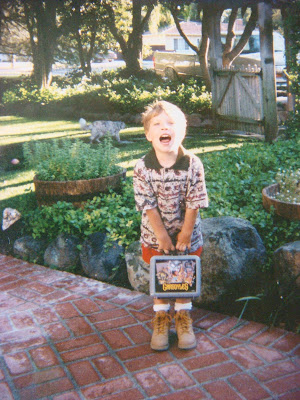 And here's his senior picture, taken in September 2007. He recently got his yearbook, and told me, "I had one of the better yearbook pictures." He's not usually self-congratulatory, but he was right. It was one of the better ones. And it's so him. I call it his Eric Clapton shot. (OK, I'm old. I'm sure there are a lot of younger musicians he also resembles.) 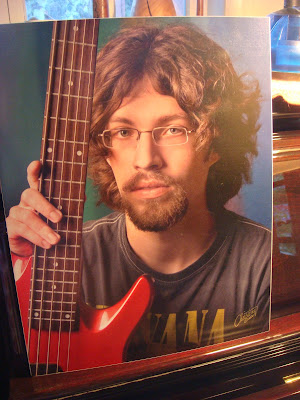 Posted by smalltownme at 5:17 PM

Are those work boots in his kindergarten photo?

I love how much nicer his senior photo is than so many others that are posed and unnatural.

Yes, I think a grandpa gave them to him and he loved them while they fit. (They replaced a pair of red rainboots which weren't practical for walking).

Your first day picture is cuter than mine. Same shirt, same boots, no lunch pail, not roaring. Maybe we can switch.
m-i-l

That is a GREAT senior picture. Lots of character.

I have a son who (still) wears boots as his regular shoes. Boots for cool weather; Crocs for warm. Standard uniform. :)

Can I tell you how old you just made me feel? I was graduated BEFORE he even started school!

Seriously, congrats to Frank and that is one seriously awesome senior picture!

Did he wear the kilt?

I think BOTH pictures show a lot of character! I like them.