Yesterday I was getting ready to drive to the airport to pick up Ernest. I wanted to leave earlier than I originally planned (but that's another post) so I needed a quick breakfast. Scrambled eggs, I thought. That's fast AND nutritious. So I grabbed an egg...and said what the some other word that is not family friendly heck? The egg was hot. HOT. The whole fridge was hot and the temperature display was off. But the freezer was fine.

As I always do in a moment of crisis, I called the handy husband for his opinion. Because he always has good advice. And then I avoid the "well, you should have done this..." conversation that usually happens if I don't call. The Handy advice was, "Unplug it for 5 minutes."

Done, and the display started working again and said 71 degrees. Room temperature. And I had to leave the house right that minute or I wouldn't make it to the airport on time. So Frank agreed to check the fridge periodically to see if it started to cool down again, and if it didn't the Handy Husband would call for repairs.

And it did cool down again ...

What the frickety-frack happened? Maybe it was left ajar overnight just enough that the light stayed on? Who knows? When I got home I threw out milk, eggs, chicken, mayo, yogurt, whipped cream, batter blaster, leftovers...anything I thought would kill us. I did keep the condiments on the lower shelves, and the things in the bins, as they were still cool to the touch.

I wish I could find a song called "Refrigerator Blues." Anyone want to write some lyrics?

This seems the opportune time to post a picture of the fridge, like many other bloggers have done. So here's mine. It's a lot emptier now! 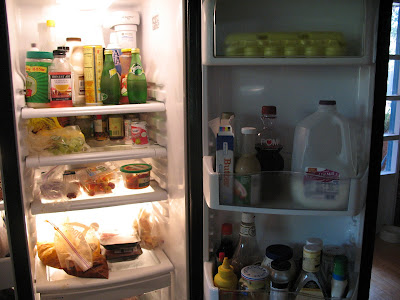 Posted by smalltownme at 4:18 PM

Labels: around the house

Sounds like HH had some good advice! Me? It's likely I would have already been at Home Depot shopping for a new one! Glad things are back to chilly normal! And yes, that's enough salad dressing to open a restaurant!

It looks like those are the glass bottles of Perrier--you don't buy the 24 pack at Costco? It's the only way I can justify my addiction.

I'm too ashamed to show my fridge to anyone!! I just threw out some hairy stuff that I have no idea what it was origanally!!

Sounds like you did the same thing with your fridge that I keep doing with my modem.

Congrats on getting your fridge working again! I hate mine - it came with the house. If it does anything odd I'm hauling it to the curb just so I can get a new one. You think I'm kidding?

Also, regarding a comment you left me a few days ago, how cool is it that you see David Crosby around town? No surprise, at a restaurant. He looks like he spends a lot of time eating.

I would never in a million, billion years post a picture of my refrigerator, except it was the one time in a billion, trillion years that I had cleaned it out top to bottom. There's always SOMETHING in there that is so old, overlooked, that it just can't be shown on film (digital whatever).

Thanks for the reference! Was just reading along when I saw it!

Ooooh, glad it's working again! Have you dusted the coils on the back lately? The back of my fridge is a magnet for the neverending dog hair, and I can tell a huge difference if I've skipped cleaning it out that month.

I have a little addiction to San Pellegrino. :)

Did you ever find the Refrigerator Blues lyrics?
Not sure who wrote it, but Baby Needs Shoes recorded it back around 2000. Cute song!