My aunt Anna Agatha Amaryllis Agapantha Arsenica Amber (there's a story behind that) was a dedicated birdwatcher. She kept a huge pair of binoculars next to the picture window in our living room. Those binocs were powerful enough to see a waterfall in the hills some miles away! Sometimes I think there was some spying on the neighbors, but their main purpose was birdwatching.

The birdwatching hobby didn't take with me, but one bird I do recognize is a towhee. These small greyish brown birds are everywhere. 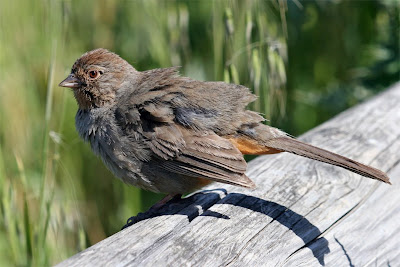 Photo from Save La Cresta Ridge and Ravine.

They even use our birdbath when the cat's not around. (It's surprising how many hits I get for "why won't birds use my birdbath?") 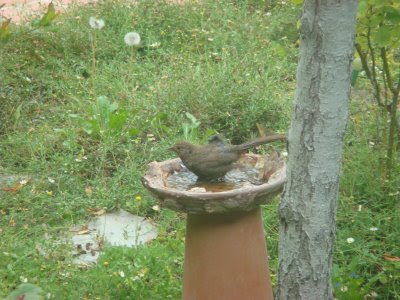 On Saturday, "everywhere" included inside my garage. I opened the garage door with the new opener button on the wall, and flap flap flap....there was a little bird flying around. I don't know if it had been there a while, or flew in when I opened the door. I left the door open and it was gone when I returned from my adventure.

I'd love to hear the story behind that name!