On Sunday, I got to the new 2-story Tar-zhay 75 miles away. It was so new, the palm trees were still tied up. 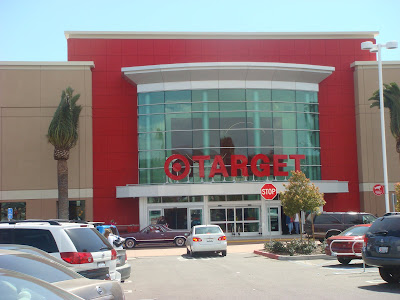 It was incredibly crowded. I parked my large car in a compact spot, like all the SUVs did. It was packed inside. People were fascinated with the cart escalator. I kid you not, there was a group of people standing there watching it.

Sadly, I couldn't think of anything to buy. I thought of getting Ernest's birthday presents, but it was still over a month away. I don't like to buy things too early, sometimes there is a problem with returns. (Like with my computer, the HH bought it 34 days before Christmas and when we found out it was defective they wouldn't take it back because they had a 31 day return policy.)

So I wandered out, through the mall, ate some fish tacos, fondled underwear in Victoria's Secret, and then went back to Target to get to the parking lot. 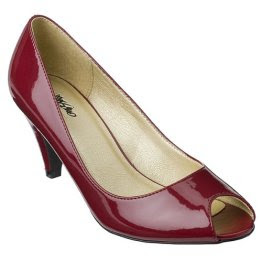 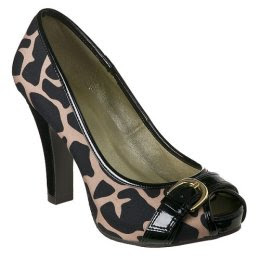 GIRAFFE! Who doesn't need a pair of $24 Giraffe-pattern shoes? So I bought both. I have no idea when I'll ever wear them. But at the moment, I really NEEDED them.
Posted by smalltownme at 3:39 PM

You are the third person I know to have purchased those red peep toe pumps! I'm starting to feel left out even though I'm more of a Danskos kinda girl.

Vanessa, you must be the one other reader (besides myself) who has me on Google Reader. Thank you! I rhapsodized over my 80's heels, but for a long time I have been a flat shoe girl. I don't know why I am into these heels now. Maybe a desire to be more girly and less mom-ish? Although I envision myself in the heels like the hippo ballerina in Fantasia! But she was beautiful!

Love those shoes and wear them with pride. I'm sure they will look fabulous on you! Have you ever heard the song by Baz Luhrman called Wear Sunscreen? It was a college graduation speech at some point?

It's always a good day when a pair of shoes finds a home. They're like stylish puppies that way.

Hey, I have you on GoogleReader too!

Love the shoes; I may have to pay a visit to my local Target myself. Social Butterfly and I now wear the same size so it defintely amortizes well to buy twice as many shoes.

Still envious of your double decker Tar-zhay!!
Love, Love, Love the giraffe print shoes. If they would have been the last pair I would have fought you tooth and nail for those puppies. They will look really cute with jeans!!